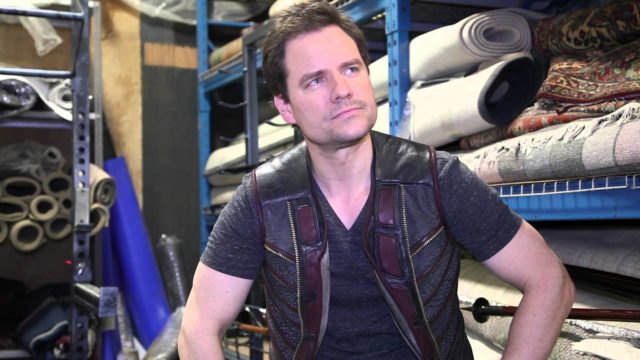 For those of you who love sci-fi thrillers, the second season of Dark Matter will be off and running in less than two weeks. For those of you who are not aware of what this show is about. It is a show about six crew mates and one android, who find themselves stranded on a spacecraft called Raza, but as each awakens, they find that they don’t remember who they are. In order to maintain some form of identity, the crew names themselves with numbers that represent the order in which they awakened on the craft. The show is centered on the crew searching to find out who they are, and what caused their memories to be obliterated.

Anthony Lemke plays one of the six members of the crew members who is number three, and just so happens to be the resident low-life of the bunch. You know that every sci-fi flick has to have the low-life that no one can stand. Whether you are a fan of the show or not, here are five things about Anthony Lemke that you probably didn’t know.

1. He Actually Loves Playing His Character

When a person thinks about sci-fi films and television series, they really don’t give a lot of consideration to the depth of a character. While everyone loves William Shatner in the original Star Trek series, you will never hear anyone speaking about the depth of his character and how much he had to work to get into character. Well, Lemke spends a substantial amount of time getting into character to place his sleazy role and he absolutely loves it.

2. He Says that This Character Actually Fits

It turns out that this type a role is a role that Lemke has played multiple times in the past, and he admits that it is a smooth transition moving into character to play this role. According to the actor, there are some roles that require a great deal of effort to get into character, but these type of roles fit him like a glove.

3. There Was No Backstory When Lemke First Took the Role

While Lemke understood what was being asked of his character, the nature of the show would not allow for the actors and actresses to be privy to the backstory of their characters. This approach by the director ensured that the mystery of who they where would be authentic, because no one really knew who they were, until well into the first season of the show.

4. He Admits that One Scene Had Him a Bit Concerned About His Health

He says that while shooting on location, there was this one scene in which they were in an old factory that had not been cleaned in ages, and they crew had sprayed the walls of the factory with some type of Black foamy substance that had a bad order. He said everyone except the actors had on masks, and so they were not sure if they should breathe or not. According to Lemke, in hindsight it is funny, but not so much then.

5. He is Overwhelmed by the Fan Response

You wouldn’t expect an actor who is closing in on 100 TV and film credits to admit that the fan response to the show is a bit overwhelming. He admits that nothing that he has done in the past has prepared him for the fanatics that he has encountered since they started airing these episodes. The sci-fi fan is a different kind of animal altogether.