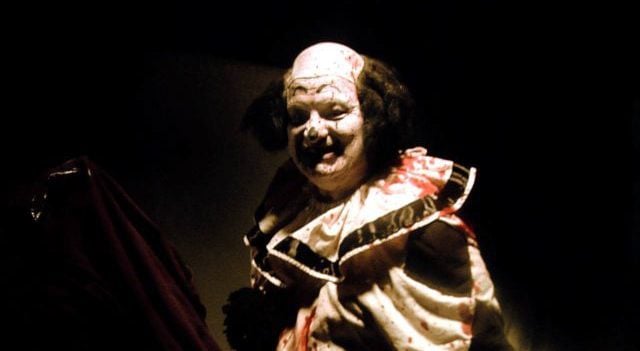 For some people this might have been preferable to forget about a psychotic, maniacal-looking clown. Some people like them and trust the painted-on faces and goofy, awkward nature, but to others that look simply spells trouble with a capital T. Maybe it’s the big baggy pants or the shoes that don’t fit or something more inherently devious, but in the past few decades clowns have been known to give many people the heebie jeebies in a way that is anything good. In films they’re almost always the bad guy it seems, as though many directors were tormented in their childhood by a greasepaint-wearing sociopath that smiled in a lecherous way as they offered a bundle of cotton candy laced with some particularly nasty.

And in case that wasn’t creepy enough, here are a few films you might have forgotten about starring clowns that would make Bozo run for cover.

As if clowns weren’t already scary enough. Killjoy is a different type of clown considering that he comes from the hood and is straight up insane. When a young man that’s been the target of innumerable physical attacks goes looking for an answer to his problem he stumbles upon the legend of Killjoy and, in typical movie fashion, summons the demonic clown to punish his tormentors. The only problem is that Killjoy doesn’t have a kill switch.

This is the stuff that childhood nightmares are made of. Not only are they creepy, saggy-looking clowns, but they’re killer clowns from outer space. Yes, from outer space. They consume people, they have devilish devices that can kill human beings, and they are undeniably insane. In this day and age such a premise might be considered to be silly and even comical, but back in the 1980’s it was, well, still comical and silly, but terrifying as well.

It’s easy to laugh at a killer clown when it’s supposedly from outer space or is somehow mystical in nature, but it’s not quite so easy when the clown is real and out to get you. Whoever thought that sending a bunch of inmates to a circus to “relax” must have had a serious dark sense of humor. When three mental patients escape and dress themselves as clowns it becomes a certified nightmare for one young boy that is deathly afraid of clowns.

So this isn’t all about clowns, but the main villain is one creepy-looking character. Worse is the fact that he seems to take pleasure in stalking his prey, the female lead, throughout the film all for the sake of fun. When a person wears no makeup and no extra baggy clothing they can be terrifying enough. When they done the face of a clown however the terror quotient gets dialed up to an easy eleven.

This film is just dark. It goes beyond the conventional funny but terrifying clown story into something fit for the Faces of Death series. The gore is almost nonstop and the fact that it is committed by a clown who is smiling as he hands out these ghastly punishments is almost sickening to watch. Hands down this is the scariest and most disturbing film on this list.

Clowns are a terrifying lot to be certain. Behind their greasepaint smiles could lie anything that the human psyche is possible of delivering in terms of horror, and to date, a great many filmmakers have sought to capture that in a variety of ways.