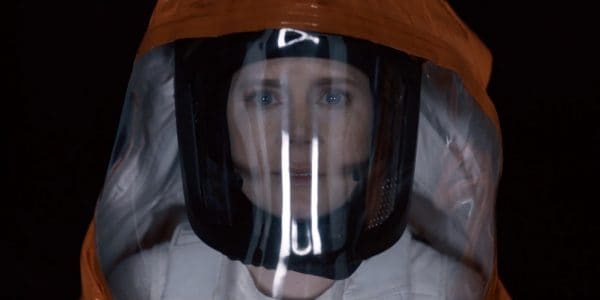 Ever since the Academy Awards broadened the Best Picture category to more than just five nominees, virtually every Oscar race has featured a major sci-fi contender.  Avatar, District 9, Inception, Gravity, Mad Max: Fury Road and The Martian have all made major splashes at the annual awards show, many going on to win some of the night’s major prizes.  And it seems, with the release of Denis Villeneuve’s Arrival, 2016 has its contribution to this trend.

When a series of twelve alien ships land at various points across the Earth, the planet is sent into a reeling panic.  Rioting, looting and general mayhem rage across the globe as the world’s governments race to communicate with the visiting beings: who are they, where did they come from and, most importantly of all, why are they here? 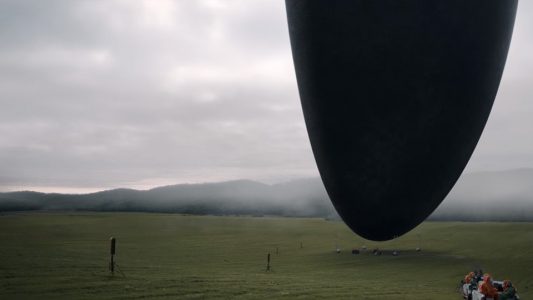 Linguist Louise Banks (Amy Adams), theoretical physicist Ian Donnelly (Jeremy Renner) and US Army Colonel Weber (Forrest Whitaker) are part of the US team enlisted to answer those exact questions.  But as they attempt to decipher the alien language — whose circular hieroglyphs resemble nothing seen on Earth — mounting pressure from hostile foreign governments, frightened masses and militant media figureheads — not to mention Louise’s increasingly vivid hallucinations — threatens to doom humanity to extinction.

I can’t say exactly what it was that I was expecting when I finally sat down to watch Arrival, but it wasn’t quite this.  A good movie, certainly, based on its then 100% rating on Rotten Tomatoes (which has since dipped to 93%).  Well-acted, sure, based on its incredible cast of hard-hitters that have been nominated for a collective eight acting Oscars (one of which was a resounding win).  And, of course, well-directed, given that Denis Villeneuve’s previous work — including Sicario, Prisoners and Enemy — have consistently ranked among their years’ best films. 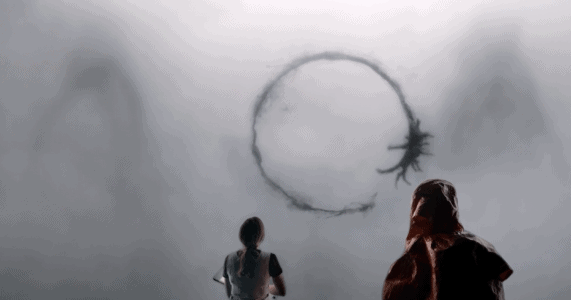 Beyond that, however, I didn’t have much to go off of.  The film’s marketing was conspicuously vague about what, if anything, actually happens in the movie.  The critical reviews have all respectfully referenced a Shyamalan-esque twist upon which the actual enjoyment of Arrival hinges, but have generally kept silent on the issue for fear of spoiling anybody interested enough to go see it.

Having now seen it myself, it is, and will likely remain, one of my favorite films of the year.  It’s an intelligent, moving and powerfully imaginative film that skillfully follows the traditions of movies like Close Encounters of the Third Kind, Contact and Interstellar.  It’s like watching Terrence Malick direct Interstellar or Stephen Spielberg direct The Tree of Life. 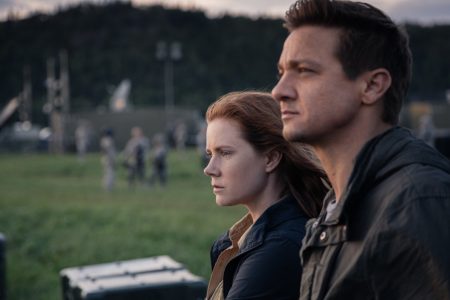 It is, in other words, an arthouse movie masquerading as a blockbuster: more poetry than narrative.  And while dark and beautiful and moving in ways that I can’t quite bring myself to express in words, it is not for everybody.  The older couple sitting behind me nitpicked every scene and plot point throughout the screening and, when the credits began to roll, loudly exclaimed “that’s it?”

It resists sentimentality with enthusiastic zeal, so while there are genuinely sad cuts to Amy Adams’ terminally ill child, they come off cold and somewhat detached from the rest of the story.  While this may turn off audience members who want a little emotional heft to go with their popcorn, it becomes obvious by the end why the story could not have unfolded any other way. 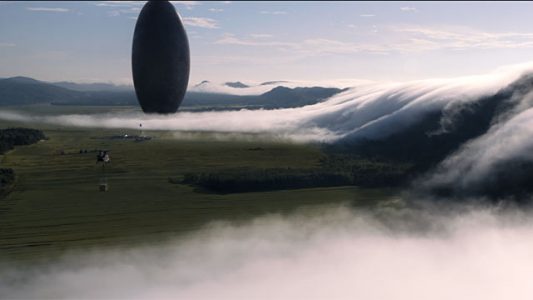 It is also, I imagine, a film without a lot of replay value.  It’s a one-and-done kind of experience in the tradition of Boyhood or Amadeus.  It’s not that the film is without merit when the twist is finally revealed — like virtually every Shyamalan movie is — just that the core experience of the movie can be pulled from a single viewing and is likely enough to mull over for a lifetime.  It’s not a flick that you pop in on a rainy Summer Sunday to pass some time; the only occasion I can possibly see myself watching it again is to show somebody, and I am perfectly okay with that.

It is also something that is bound to appeal especially strong to viewers of a certain political bent.  Without getting to deeply into the matter, it’s about a fiercely intelligent woman who saves the world through communication and understanding while being constantly undermined by the men surrounding her (including political leaders, soldiers and an obvious Rush Limbaugh stand-in).  While it will certainly appeal to conservative movie-goers as well, I can’t help but feel — especially given the timing of its release — that more liberal viewers will be better predisposed to enjoying it.

Buy on BluRay:  No, but not for lack of quality.