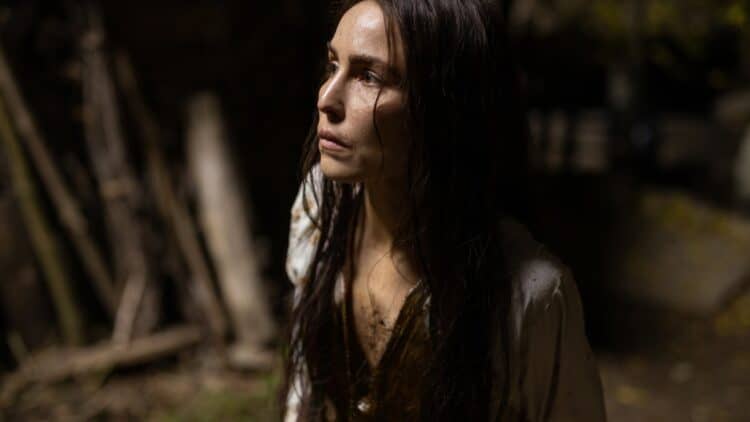 The internationally co-produced folktale-horror film You Won’t Be Alone hit theaters last April 1, starring Noomi Rapace, Anamaria Marinca, Alice Englert, Carloto Cotta, Félix Maritaud, and Sara Klimoska. The film was directed by Goran Stolevski, in his directorial debut, and follows the story of a young girl kidnapped as a baby and turned into a witch. Set in 19-century Macedonia, the plot centers on the young girl’s curiosity about humanity as she uses her power to take the form of the humans she kills. The film has received positive reviews from critics and is praised for its experimental take on the genre involving existential themes in a horror film. In a review published by New York Times, they describe the deeper themes tackled by the film saying, “Along the way, this strange, deeply humane movie becomes a beguiling meditation on identity and gender, underscoring the precarity of women in a society ruled by men. Within its mystical borders, tenderness and savagery walk side by side, and a palm stretched out in friendship may conceal a witch’s claw.” If you were drawn to the film’s originality and existential themes here are five movies that give a similar vibe and involve similar elements in You Won’t Be Alone.

A folktale horror film also centering on the supernatural encounters of a young woman and her family similar to You Won’t Be Alone is the 2015 period supernatural horror film The Witch, written and directed by Robert Eggers in his feature directorial debut. It stars Anya Taylor-Joy, in her film debut, who in the following year also starred in the psychological thriller Split. The movie also featured Ralph Ineson, Kate Dickie, Harvey Scrimshaw, Ellie Grainger, and Lucas Dawson. Set in 1630s England, a family faces a hurdle when their youngest son vanishes and they turn suspicion towards the eldest daughter and begin to accuse her of witchcraft. The film received generally positive reviews and in an article by Vox, they wrote, “The Witch isn’t a horror film where the scares come from big spooky jolts, or from gore. No, The Witch is a horror film that creeps up on you, spreading its tendrils slowly across the landscape of your mind.”

The 2011 gothic romantic drama film Jane Eyre based on Charlotte Brontë’s 1847 novel of the same name does not belong to the same genre as You Won’t be Alone but also involves elements of moral and spiritual growth and reflection. The film was directed by Cary Fukunaga and written by Moira Buffini starring Mia Wasikowska and Michael Fassbender. The plot centers on orphaned girl Jane Eyre, who despite a childhood filled with neglect and abuse succeeds to become a governess at the estate of employer Edward Rochester. Jane and Edward begin to form a special bond but she discovers a dark secret about the man he is falling for. The film received relatively positive reviews and earned an Academy Award nomination for Best Costume Design. The Guardian published a review of the film and highlighted Wasikowska’s performance as Jane Eyre saying, “Wasikowska carries off the bonnets and the middle-parting and fiercely self-deprecatory references to her own plainness as only a sensationally beautiful film star can. Her north country accent, incidentally, is far superior to Anne Hathaway’s. But like many Hollywood stars for whom Britspeak is not the mother tongue, this is achieved with slowness and control.”

Just like You Won’t Be Alone, the critically acclaimed 1994 romantic drama film Before the Rain is set in Macedonia as well as London and evoke strong emotions. The film was written and directed by Milcho Manchevski and stars Katrin Cartlidge, Rade Šerbedžija, Grégoire Colin, and Labina Mitevska. The film features interconnected love stories of a monk, a British photo agent, and a native Macedonian photojournalist as they are surrounded by a world filled with violence and hate. The acclaimed Macedonian drama film has received numerous accolades which include winning the Golden Lion at the Venice Film Festival and earning a nomination for Best Foreign Language Film at the 67th Academy Awards in 1995, making history as North Macedonia’s first Academy Award nomination. Variety published a review of the riveting film and wrote, “Actors have a strong iconic presence, in which faces are as important as speeches. Dialogue is kept to a realistic minimum. A passionate soundtrack by Anastasia provides a powerful driving force in the film. Manuel Teran’s breathtaking cinematography imparts a tragic natural beauty to the landscape which, the film implies, may soon be torn apart by war.”

There’s nothing more existential than the South Korean film Spring, Summer, Fall, Winter… and Spring directed by Kim Ki-duk starring O Yeong-su, Kim Young-min, Seo Jae-kyung, and Yeo-jin Ha. The film follows a Buddhist monk and his teacher as he passes through his life stages just like the seasons. The film received largely positive reviews from critics and is highly praised in a review by the New York Times, saying “But the story, effortlessly joining the cycle of the seasons to the larger rhythms of the life cycle, has a beguiling perfection. Along the way, there are numerous surprises, and you are never sure, as one chapter gives way to the next, how many changes will have taken place.”

Spirit of the Beehive

A powerful film that also involves elements of humanity and social issues is the 1973 Spanish drama film The Spirit of the Beehive directed by Víctor Erice in his directional debut. The haunting and meaningful film showcases a different kind of horror and follows the story of a young girl named Ana in a small Spanish village who becomes greatly fascinated with the movie Frankenstein after watching a special screening of the film in the village with her sister. The film is set after Gen. Franco’s victory in the Spanish Civil War and the beginning of his long dictatorship. The critically acclaimed film has won several awards including Silver Hugo Award at the Chicago International Film Festival, CEC Award; Best Film, Best Actor (Fernando Fernán Gómez) Best Director (Víctor Erice) at the Cinema Writers Circle Awards, Spain, and the Golden Seashell Award at the San Sebastián International Film Festival. Empire gave a five-star rating in their film review and wrote, “Whether its tactful reticence in political matters was due to artistic intent or a desire to dance around the censors, this is a film whose significance is as universal as it is specific. The static images and haunted faces suggest situations which have endured for centuries and which will persist no matter who rules the country”