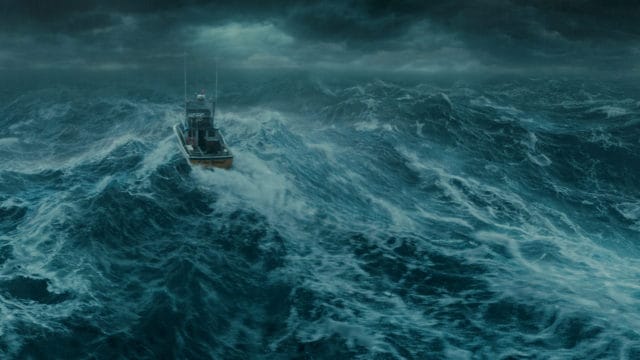 The ocean covers the majority of the planet. It is able to consume anyone and anything it desires and when it rises up from its bed, huh boy, it means something very bad has happened and an imbalance of titanic proportions has caused it to stir. When the ocean comes for the land it’s never a pretty sight, but when it seeks to intimidate or inspire those that ply its waters it can be an impressive sight that most won’t ever forget. There’s reason why sailors and wayfinders from way back in the day paid their respects to oceanic deities and spirits alike. They knew very well that at any time the ocean could come to claim them, and there wouldn’t be a thing they could do about it.

Here are a few movie clips to remind you just how big and overwhelming the high seas can really be.

The lives of deep sea fishermen are perilous enough without making their way straight into a storm front. When the Andrea Gale makes its way into the worst sea-born storm to ever hit the east coast though the chances of survival went from nil to nothing in a matter of seconds. When the sea gets good and riled it won’t matter how strong a man’s will is, the sea will have its due.

4. The Day After Tomorrow

People keep harping on how we need to take care of our planet and they’re not wrong. The difference between the movie and reality however is that as much harping as is done the planet will one day right itself and that could very well mean that millions of lives could be lost in a matter of instants. The sea will play a rather big role in reasserting the dominance of Mother Nature, largely because it is one of her biggest and most dangerous tools.

What’s that saying? If you want to experience the ultimate you have to be willing to pay the ultimate price. I think Bodhi knew what he was talking about, and no matter that he couldn’t hang I think he knew what he was paddling towards. It seems reasonable to believe that he understood his line had run out, and there was only one way out that was acceptable to his way of thinking.

A single little scrap of island in the middle of an ocean is a lonely place to be. One might think that with most of the world being mapped and known that Tom Hanks could have been found. But think about it, the ocean is massive, and its many features are so wide in scope that finding one single island in untold miles of water is about as easy as finding that one slim needle in a haystack. It might be possible, but it will take a very long time.

Anyone who’s afraid of the open water might react like Hey-Hey does, and it’s understandable. A lot of people can’t handle the fact that the ocean is this big and, for the most part, inhospitable to land-dwellers. Unless you’ve learned to live on the ocean and find your way from port to port it’s just not the place for you.

The ocean is big, deep, and full of mystery. One very important thing to note however is that its immensity is also its greatest asset, and our greatest danger.