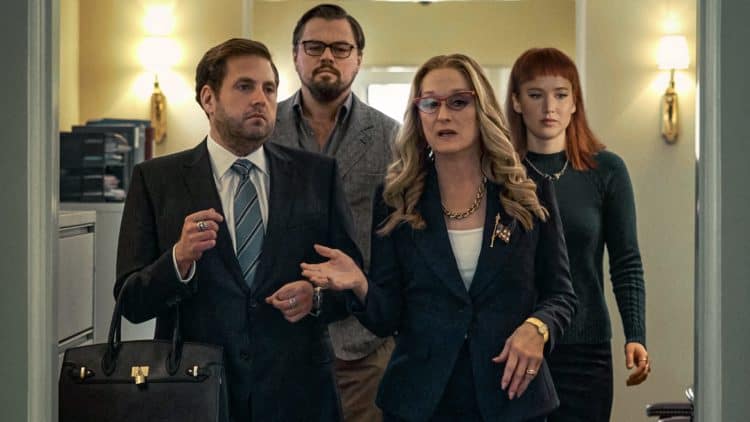 In several weeks, Jennifer Lawrence and Leonardo DiCaprio will make their returns in Adam Mckay’s Don’t Look Up. The film sees Kate Dibiasky and Dr. Randall Mindy make a shocking discovery of a comet that’s on a direct collision course to Earth. The Netflix exclusive is loaded with an A-list cast including Meryl Streep, Jonah Hill, and Cate Blanchett. This list will examine the five excellent movies involving the cast members of Don’t Look Up. Given the star power, not every movie is going to make the list; however, animated features are the ones exempt here.

In this mind-bending and twisty Christopher Nolan classic, Leonardo DiCaprio plays Dom Cobb, a thief who has the ability to enter people’s dreams and steal their secrets. While Inception won’t win awards for great character development, this nail-baiting feature has awe-inspiring visuals, cool action sequences, and a original story that keeps you guessing until the very end. Nolan has become a master at playing mind games with his audiences thanks to his other classics, Memento and The Prestige; however, the director expertly weaves through the story without turning it into a convoluted and confusing mess. The ending of Inception still remains one of the most talked-about moments in film history. A great movie that’s help carried by a top-notch cast that also includes Joseph Gordon-Levitt, Tom Hardy, Marion Cotillard, and Michael Caine.

In this tragic, yet romantic James Cameron feature, Titanic centers around the R.M.S. Titanic, which met its demise by crashing into an iceberg of the North Atlantic that resulted in the deaths of over 1,500 people in 1912. This still remains the deadliest peacetime sinking of a cruise ship to date. This intimate film could’ve easily veered into popcorn entertainment; however, Cameron wisely focuses on the characters instead of action, thus making the ending more tragic. At the center of the story is the love between Jack Dawson and Rose DeWitt Bukater, and though the film goes into melodramatic territory at times, Titanic still manages to tug on your heart strings without manipulating its audiences. The 1997 feature is by no means perfect, but it’s an engrossing fictionalization on a true event that’s forever etched into American history.

This sweet and quirky love story follows Pat Solatano, who’s fresh out of the mental institution, and the divorcee looks to rebuild his life and reunite with his wife. However, the situation takes an interesting turn when Pat meets Tiffany, a damaged widow who takes a liking to Pat and complicates his life even further. While Silver Linings Playbook doesn’t really dive deep into the struggles of mental health, it’s still an entertaining affair that nicely gives the romantic comedy genre an interesting twist. Bradley Cooper and Jennifer Lawrence have amazing chemistry with one another and their developing relationship feels authentic and real. The moments that play up Tiffany and Pat’s mental issues for laughs may not be for everyone, but Silver Lining Playbook does carefully balance the line on its sensitive subject by never mocking or tearing down its characters for their issues. An earnest and well-intentioned love story that strikes all the right cords.

While not the Oscar winning type film on the list, 21 Jump Street is easily one of the funniest movies to come out in the 2010s. The remake of the television series sees Schmidt and Jenko join the Jump Street unit, with the duo being tasked to go undercover as high school students to shut down a dangerous drug ring. 21 Jump Street is the rare reboot that improves upon the original series in nearly every aspect. Channing Tatum and Jonah Hill are a winning combination and the fish-out-of-water storyline provides organic and hilarious moments. The supporting cast really helps balance out the film as well, with the surprise Johnny Depp cameo being amongst one of the big highlights of the movie.

One of the most criminally underrated movies in Ryan Gosling’s filmography. This neo-noir follows a Hollywood stuntman who’s also a getaway driver for criminals. As time goes on, Driver falls for the beautiful Irene; however, when her husband gets out of prison, Driver’s life takes a chaotic turn for the worst after a job goes terribly awry. Brimming with gorgeous cinematography, packed with thrilling car chases, brutal violence, and a fascinating protagonist who barely talks, Drive is an excellent crime saga that expertly dives into the criminal underbelly of modern society. Gosling is mostly known for his charm and comedic talents; however, the actor seamlessly plays the calm stuntman who has a dark side to him once the sun goes down. He’s helped by a talented cast of veterans, namely Albert Brooks, Oscar Isaac, and Ron Perlman. As long as you don’t go into this film thinking that it’s an indie version of the Fast and the Furious, then you’ll surely get excitement out of the 2011 feature.

Fan Theory: Doc Brown was Suicidal in Back to the Future
Comics Lists News Things You Didn't Know Whatever Happened To