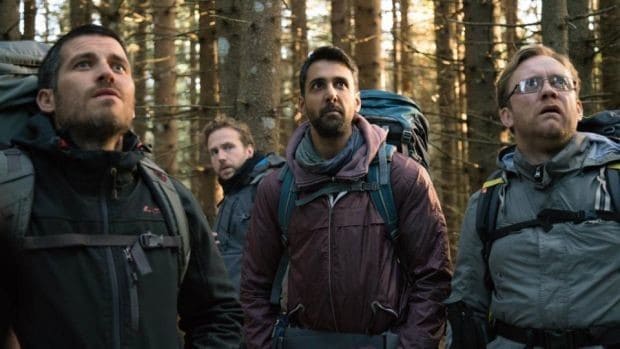 Netflix is certainly stepping up their game when it comes to the type of movies they’re producing, and some of them have been among the most disturbing that you can possibly imagine. They’ve even been able to get some seriously top notch actors that others don’t seem to think are worth the attention any longer, and in the movies shown below the talent is nonstop entertaining. Eventually it seems as though streaming is going to be the big go-to aside from theaters, which have been suffering as well thanks to the convenience and capability of streaming networks, but at the very least the fact that streaming networks are coming up with their own movies should be more of an inspiration for filmmakers to continue upping the quality of their productions rather than fearing the day that they’re put out of business.

With that being said here are five of the most disturbing movies that Netflix has put out.

Ever notice how in movies people wander off the beaten path and think it’s an okay idea, as if reality can’t take place within the movie script? When four friends decide to cut their hike through nature a bit short after one of them injures their ankle they pass through a forest that is clearly marked on the map, eschewing the path that is CLEARLY marked going AROUND it. It seems okay in movies to ignore the fact that the cartographer that found the forest to start with thought it was a good idea to go around, but when expedience is desired and the guys ignore the strangeness they see and hear going in you can bet that things are about to happen. Hopefully in real life people don’t allow this kind of stupidity to run their lives, but that would be expecting a lot from some people.

A lot of young boys might have been in this position when their parents hire a hot babysitter to watch them for the night. But how many would ever be able to say that they watched their babysitter commit ritualistic murder in their living room? Well, hopefully none since it would be the kind of thing that might scar you for life after having seen it. But in a twist, the young boy that witnesses the murder somehow manages to turn the tables on the babysitter and her killer accomplices and kills them one by one before finally coming to a final showdown with the babysitter that supposedly kills her, at least until you see her pop up at the end.

This movie is simply disturbing because it deals with too much realism to be believed. Many people are affected by anorexia nervosa and the condition is quite damaging to the body. Whereas obesity can cause its own fair share of problems, anorexia can do the same but with different complications that arise from the lack of too little food and the inclusion of too much exercise. So many people, women in particular, are so afraid of gaining even an ounce of unwanted weight that they will begin to cut back on their meals and continually deny themselves anything other than fluids and a bite here and there while they’ll continue to exercise as hard and as much as they can.

2. What Happened to Monday

In a time when the world is severely overpopulated the government takes to limiting families to having only one child. However, when a man has seven identical children he hides them away and allows each one of them to leave the house on their day, assuming the same identity as her sisters in order to make it seem as though they are an only child without siblings. When Monday goes missing however the sisters have to pull together to fight the government forces and find out what happened to their sibling as the authorities close in and force their hand. Unfortunately with the problem of the population as it stands this is one of those movies that rests too close to home.

Most of the time when we dream it’s just that, dreams. But when the child in this film dreams it can either be a blessing or a terrifying curse as he’s visited by nightmares that are beyond anything he or his parents are equipped to deal with. Unfortunately the human body can only stay awake for so long before needing rest, and the moment the boy falls asleep, the nightmares begin to come out again, until finally they grow so strong that they’re able to appear without needing to wait for him to sleep.

Disturbing movies can come in all genres, all that they need to be disturbing is a story line that unnerves someone in a way that is not expected.