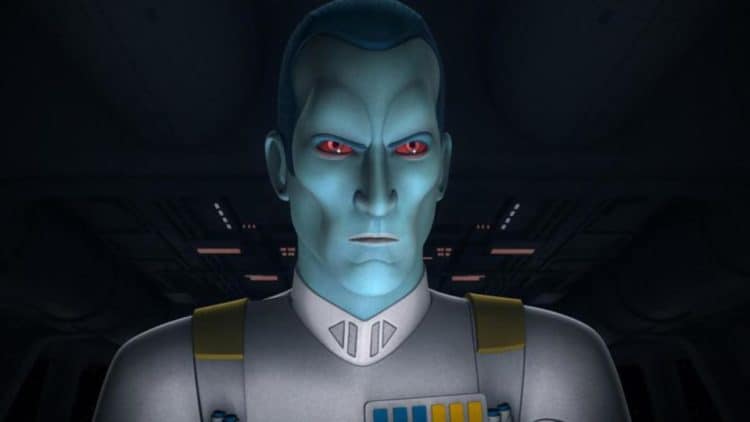 The mention of Grand Admiral Thrawn in the latest chapter of The Mandalorian likely threw a lot of people into a tizzy since not only had we just witnessed the emergence of Ahsoka, but the utterance of Thrawn’s name was great since it does mean that there’s at least a chance that we’ll get to see the Chiss admiral at some point, but how he could fit into Din Djarin’s story is hard to imagine at this point largely because he’s been an Imperial for some time and there’s no denying that Din wants to steer clear of any Imperial influence at this time since they want Grogu for their experiments, which has been made obvious. But one thing about Thrawn is that if he’s interested in something, or someone, then it’s likely that he’ll end up getting what he wants, or will at least find a way to satisfy his curiosity. Anyone that’s read about Thrawn in the various Star Wars novels he’s shown up in or watched him in Rebels, knows that he’s a very slick and very careful individual that knows how to get people to do what he wants, and has a very strange way of finding out an enemy’s weaknesses and strengths, meaning that he could be a very deadly enemy if Din runs afoul of him.

Here are a few individuals that might be able to play Grand Admiral Thrawn.

Fassbender is at the bottom of this list simply because it’s hard to think that he could play this role devoid of any emotion as well as those above him could since he does put a lot of emotion into his roles. That’s all well and good for many characters and it’s served him well, but one thing about Thrawn is that he’s a blank slate to most people, which is hard to emulate since one can tell just from reading about him that the guy is kind of a tempest in a teapot, as the saying goes, but he keeps it all bottled inside where no one can see it, or use it against him. Playing Thrawn would require a superior tactical mind, and Fassbender could do this, but he wouldn’t be the first pick.

Tom is another one that enjoys putting emotion into his characters, but he does feel as though he can keep his emotions closer to the vest than some since he’s been able to do it in past movies. Still, he does feel like someone that might reveal a few too many facial tics when acting, but it would be something that might be useful rather than detrimental to the character since Thrawn is such a cool character to many people. One thing about Hiddleston is that he can play a very cold and calculating character, so it does feel that he could make this role work for him if he really tamped the emotions down.

It does feel as though Idris would be scary-good at this role since he can deadpan with the best of them and can play the role of a character that would appear to not care if a person lives or dies, and is all about tactics and how to take a person apart in the most clever way possible. He’s played very physical roles, but this would appear to be one where he’d need to be more diplomatic, which he can do. It would be interesting at the very least to see how Idris would handle this role since from an emotional standpoint he could handle it quite well, but it would be a challenge to see him stand back and not take such an active role.

There’s an arrogance to Thrawn that Isaacs could definitely emulate since he’s played some of the most irritating characters in his past such as Tavington in The Patriot and Lucius Malfoy in the Harry Potter movies. To think that he would be able to take on this role isn’t too hard since he can play a truly despicable person, but he can also play someone that is calm, cruel, and as I said, a bit arrogant. The thing about Thrawn though is that his arrogance is well earned since he has the kind of tactical mind that is easy to respect and be somewhat irritated by since he doesn’t exactly mince words when he’s telling others what will happen.

The reason he’s the number one pick on this list is pretty simple, he has the look, the arrogance, and the ability to be completely emotionless when he has to be. In other words, he checks off all the right boxes when it comes to the character and that’s not something one finds all the time when looking for the right fit. Whether he would say yes or not is hard to say, but it does sound like the best pairing between character and actor.

Now we just need to wonder when we’ll see the guy.