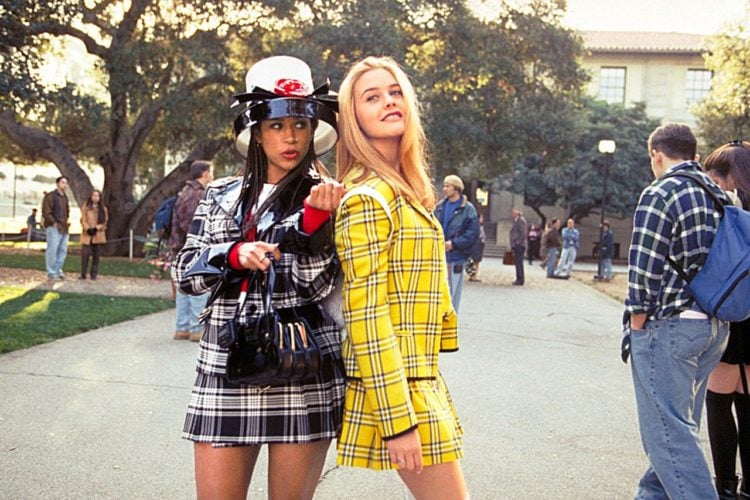 Fashion in movies is a given with many films since the fashions that are seen and copied are numerous depending on the time period. In the 90s fashion was all over the place since it had so many different styles and designers trying to make a name for themselves in an edgy decade where anything went and nothing was that so taboo that it couldn’t be used to push something new onto society. If you can recall the 90s were the kind of times in which people were trying to find themselves and establish an identity within society so that people might think they were hip, trendy, and knew what they were doing with the type of cool that they wanted to promote. Of course that gave rise to some seriously messed-up designs and fashion flops but all the same it was the decade for making mistakes that would eventually turn into something great.

Here are a few movies from the 90s that helped certain fashion trends take off, at least for a while.

The all-black look was one that thankfully didn’t last long but The Matrix was one of those movies that people tried to emulate in various ways and usually wound up getting mocked for. The movie was great and utilized the looks that were prevalent throughout its length to a great degree. But the moment that someone in the real world tried to make these looks work it kind of fell flat. But in all honesty people have still tried to make the look work as black trench coats and leather have stuck around for a while with a tenacity that’s nothing short of impressive, and kind of sad in some cases.

This was almost a full on battle between the street look and the elegant, upscale look that many women prized in the 90s since it meant that they were sophisticated and were on the cutting edge of fashion. Even the lead character was caught up in the need to be fashionable after a while as she was like a kid in a candy store when her john decided to personally visit the store where she’d been shunned. Eventually though she toned down her taste in clothing and decided upon something far more conservative but still just as elegant. It served both form and function and made her look absolutely ravishing.

Few people think about back in the day how suits, ties, and cocktail dresses were the theme of Las Vegas. Now it’s t-shirts, jeans, shorts, and anything else that makes people feel comfortable. You can see throughout this movie how anyone wearing anything but nice clothing tends to get ignored or treated in a way that’s designed to make them feel as though they’re somehow less of a person. In this world the elegance of a nicely tailored suit and the well-manicured lifestyle was enough to show that the times were meant to be far more luxurious and exclusive to those that could afford such elegant things.

Do try to recall that grunge was a big thing back in the 90s. It didn’t reach across the nation quite as much, but in the Pacific Northwest it was a HUGE thing. People could be seen wearing flannels, t-shirts, ripped jeans, and all sorts of gear that were beaten and battered and made the wearer look like they slept in a van all night. But that was the fashion and it inspired a culture that lasted for a good long while. Grunge didn’t really make it into the 2000s as intact as it could have been but it was still a movement back in the 90s that people embraced without question since it was descriptive of how they felt and wanted to be seen.

When it wasn’t about something else that was just as vapid this movie was all about fashion since Cher was the kind of young woman that had more clothing in her closet than some stores had on their racks. She knew just what to put with what and the kind of clothing that would go with jut about any situation. And yet for all that she was intelligent when it came to design and fashion and a total bubble-head when it came to anything else. This wasn’t the fairest representation of the preppy woman in the 90s but unfortunately there were women like Cher around and to be honest there still are. They can make you look like a million bucks but ask them who the first president was and at least a few of them will look at you blankly. But they’ll look good while doing it.

Fashion is something you truly need to understand and care about to get into fully, otherwise many people tend to go by what they like as far as color and design.