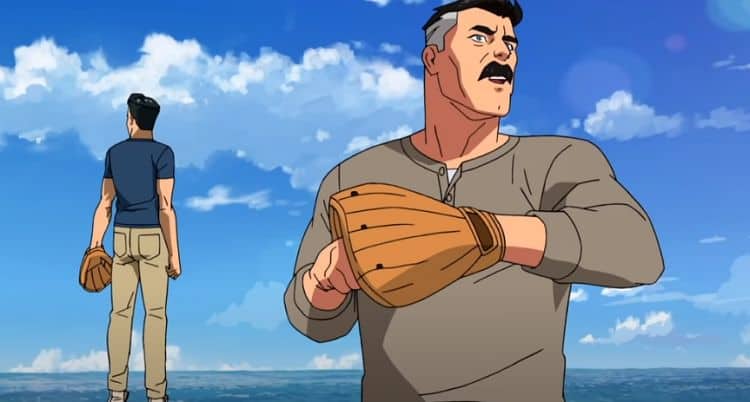 We’ve known Invincible was coming for a while, but this look at the show, or a little part of it at least, is enough to think that it might be a bit different from a lot of other animated series we’ve seen at this point, if only because of this talk between father and son as they’re playing a little around the world catch. Okay, so it’s not quite as risk-free or carefree for everyone else as it could be, since the ball could hit an oncoming plane, it did manage to smash through a mountain, and it could cause a ton of damage that would only be realistic in an animated show. Otherwise, that ball would be smashed to bits unless it was made of something so extremely durable that it could take an impact without flying apart. But getting off of that at the moment, the father/son talk is a crucial component of this series that we see a lot of in other superhero series in different ways since it invites the idea that the hero knows right from wrong and is confident that they will end up doing what they feel is right at the end of the day. The ultimate realization is that at one point or another a hero will make mistakes and they will face hard decisions, but how they move past them is what will make them a real hero and will help to define who they are moving forward.

So far it would appear that there’s going to be a huge wealth of voice talent to Invincible, as Steven Yeun is playing the titular character while J.K. Simmons is playing Omni-Man, his father, and the most powerful hero in this story. Sandra Oh will be playing the part of Invincible’s mother, while a host of other great actors will be taking on other roles that will be emerging as the series moves ahead. We won’t get to see this series until March, but it does feel as though that will be quickly approaching even as this month reaches a close. One thing about it though is that from the animation and the story it does feel as though Invincible is going to be a lot more of the same that will be rolled out for the current generation, meaning that it doesn’t necessarily feel like anything that’s all that new. That could be a lot of skepticism talking, but seeing something new and innovative would be nice. Maybe there’s more to the story that we’re not seeing yet, but so far it does look a little generic.

Fans might have something else to say in defense of the show, but it does feel likely that a person might mount a better argument than pointing out the fact that Invincible is a different hero and these are different circumstances. Pretty much any show can say this and any set of heroes that emerges on the scene can lay claim to this idea since all of them are inherently different and come with a new storyline that is essentially bound to be the same down the line since the role of a superhero is to do the right thing, to protect the weak and the innocent, and to show responsibility when it comes to dealing with their powers. But this little exercise also shows control and the ability to feel what’s going to happen before it happens, which is something that a lot of heroes are shown to have almost right away with their powers. There is something to be said about hero movies and series in which the heroes do make mistakes from time to time either because they’re learning or because they’re still fallible beings that don’t get everything right all the time. Simply thrusting them into the middle of a story with total mastery over their powers and their personality is a little boring since it doesn’t show any development and doesn’t give the impression that they’ve earned what they have. It does feel that Invincible will make this happen since it appears that the young hero will need to come to grips with being a superhero and that he’ll have to make peace with his own feelings towards it.

That will be one of the aspects that will no doubt elevate this series above others just a bit and will get the fans excited to see what the hero is bringing to the screen when the show releases. It’s a big hope that follows all shows such as this that things will work out and that there will be more than one season, which is entirely likely since superhero series are definitely a big draw still and probably will be for several years to come thanks to their overall popularity.