Home
Television
Fine, I’ll Talk About How I Don’t Want a Roseanne Revival 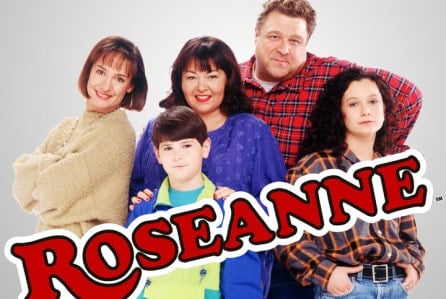 When you consider how successful the show Roseanne was and the amount of TV revivals going on right now it’s not hard to understand why it’s being brought back to television.  From a financial perspective it makes perfect sense.   From Roseanne Barr, John Goodman, Sarah Gilbert, Laurie Metcalfe and everyone else it makes sense too.  They’ll have solid work again, be in the spotlight again and have a chance to better their careers.

John Goodman Goodman and Sarah Gilbert also recently staged a mini-Roseanne revival in a video filmed during Goodman’s visit to CBS’ The Talk, which Gilbert created, co-hosts and executive produces. During Goodman’s interview, he was enthusiastic about doing a Roseanne reboot. “Oh, hell yes … if we could get everyone together,” he told co-host Julie Chen. “The Big R [Barr] and I did a pilot about five years ago that didn’t go anywhere … but we were very happy to work together.” Gilbert was more cautious when asked if she would do a reboot. “I would,” she said. “Your only fear is you don’t want to do a bad version, because you don’t want to damage what’s been done.”

Here’s my issue with a revival: the finale. It was just so weird. The Conners won the lottery and the entire 9 year series was a figment of Roseanne’s imagination?  How do you come back from that?  Eh, I don’t know.  I suppose the timing is decent because the show was considered one of the best “middle class” representational shows in history.  I don’t know.  There are just some shows that you think should be revived and some you don’t.   My opinion?  Roseanne is a no.  Will and Grace should be a no.   X-Files a yes.  Twin Peaks a yes.  Arrested Development, yes.

I guess I didn’t give a definitive reason as to WHY Roseanne shouldn’t come back.  I guess I just don’t “buy” it.  Everyone’s so much older now.  It’s hard to do a continuation.