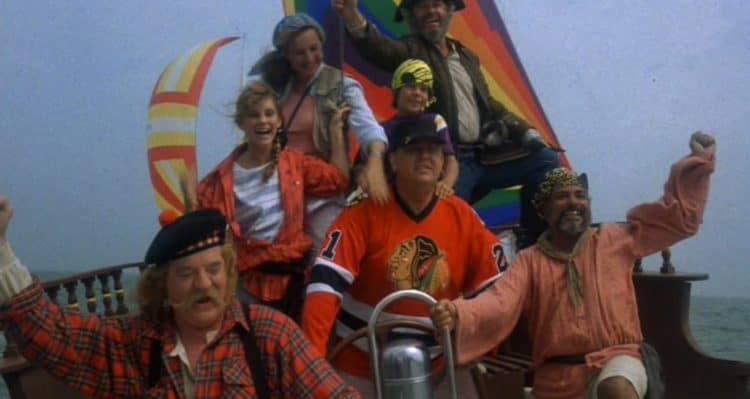 Looking back at the history of cinema it’s fun to pick out moments here and there when moments that aren’t considered to be monumental still turned out to be memorable in several ways. John Candy is still considered to be one of the funniest comedians of his time, and Rip Torn was just as hilarious in this movie since his role as Scully was meant to be that of a tired old restaurant owner as well as a worthy mentor to Candy’s character. The plight of the Chester family begins with Jack’s breakdown at work as an air traffic controller, as he’s a guy that’s been working for years without a real break and is seen to be a little too anxious as well as high-strung considering that he nearly causes a midair collision and has a near meltdown when it comes to the lack of recognition that he has a fly on his monitor. Jack is given the option of taking five weeks of paid leave or being fired for this outburst, so he packs up his family and heads for Florida.

The tone of the movie and of Jack’s life is set at the beginning of the movie, before he even gets to work when he’s cracking an egg his kids made him for breakfast. The first egg is fine, though it feels funny, but the second is raw since the kids forgot to boil it. Once he gets to work, he gets boxed in by another car and has to shimmy his way out, which adds to the already mounting feeling that his life is built up on annoyances that continue to grow daily. After being given his leave he and the family make their way to Citrus Grove, Florida, where they find a home that’s nicer than their own, but turns out to be the wrong house when the owners show up. When they find the actual rental home, the Chester’s find out that the actual rental house is kind of a dump that’s about ready to fall down, and is right next to a beach approach, meaning people feel free to walk alongside the house all day.

Things kind of continue on a downward spiral as Jack finds it close to impossible to fully relax as he hurts his leg while out boating with his son, thereby forcing him to stay home and not spend as much time with his family. Add onto that a next-door neighbor that asks everyone to tell her if her fake breasts look real, to the debacle that continues to build when Jack and his family run afoul of a rich local named Al at a restaurant, and one has a recipe for a comedy that feeds off of misery with the hope of a payoff. Jack’s story is one that a person can’t help but associate with at one point or another since he has such a run of bad luck that it’s funny even while one can’t help but wonder what they would do given the same circumstances. Some people might claim that they would react in different ways and possibly come up with a new way to look at things.

But the way things play out in this movie is hilarious since John Candy and Rip Torn were a great pair, as Jack and Scully became drinking buddies and then sailing buddies as Jack finally found his groove thanks to Scully, and even combined what he’d learned as an air traffic controller with the lessons that Scully gave him about sailing. This comes in handy when Al, who’s a champion sailboat captain, purchases the rental home the Chester’s are staying in after the owner passes away. When Al finds out that jack is renting the home he threatens to kick him out, at which point Jack challenges Al to a race, which feels ridiculous, but ends up being another great part of the movie since it pays off on the promise that life would get better for the Chester’s. The way forward was tough since they took a rundown old ship that was being used as a restaurant into a sailing ship that was capable of winning a big race once it was renovated and once it was gutted of the extra ballast. Of course, Jack’s pants added a bit more sail that was needed to give that final push.

Great memories aren’t made just solely by grand movies that were blockbusters and were considered to be outstanding in their era. Some of the best memories are made by movies that didn’t really go anywhere but were still fun to watch since they weren’t meant to be taken seriously and delivered in a few ways that bigger movies don’t always take into account. Just because a movie didn’t become a hit in its own time doesn’t mean it’s not a notable memory worth keeping.