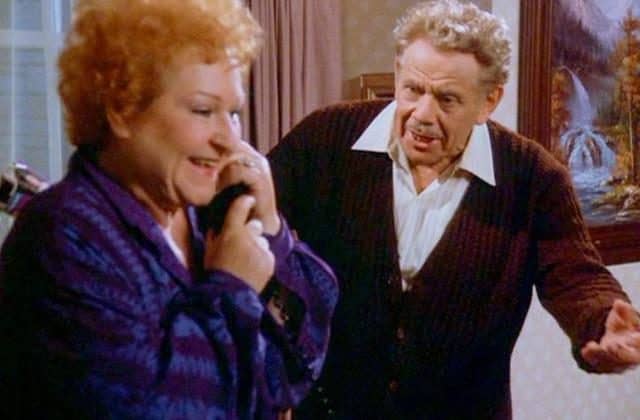 So we’ve seen now the favorite scenes of Frank Costanza and you have to wonder just what kind of woman would ever put up with some cantankerous old man like that. Well, enter Estelle Costanza. She’s just as capable of being loud but is generally more quiet until she has something to say. And when she has something to say it’s better to buckle up and listen or just exit the room the moment her mouth opens. She’s not nearly as bad as Frank largely because she’s not as mean, but her wit and her biting remarks can be every bit as emasculating to their son, who is often stuck between the both of them.

So let’s just see how bad it can get for poor George when Estelle really gets going.

It’s a little hard to reason why a woman named Donna Chang isn’t Asian in any way, but Estelle kind of takes it to a different level. It’s okay it would seem to take advice about your life from a woman whose name indicates she might be from a different country or at least a different ethnicity, but when that woman is from Long Island, well, the nerve! Estelle wants the real deal, not someone whose name says she might be the real deal. Oy.

There is such a thing as being TOO supportive. George’s career as a hand model is kind of, well, odd, but Estelle is fully ready to give him all the encouragement he needs. The only problem is that somehow her encouragement and support feels a lot more like badgering than anything else. And loud noises being bad for the skin? It’s a wonder that Frank and Estelle don’t look like old prunes at this point. Oh, wait…

3. Condom in the bed

I kind of have to side with Estelle on this one. If someone else has sex in your bed it is kind of disgusting to find any type of remnant. It might not be impossible to sterilize your bed but the mere thought that someone else was in there getting their boogie on, well, yeah, not good images. The first time the bed rocked my stomach might churn a bit, so I feel for you Estelle.

It’s one thing when you know your son isn’t quite the model, upstanding citizen that you want him to be, but it’s another when a person tells you they are and you express your disbelief. Estelle doesn’t really mean anything by it, she’s just astounded that someone might see in George the qualities that she and Frank seem to miss so often. To be fair though George is, well, he’s kind of a mess. Not pointing fingers.

So let’s not discuss why she’s there to start with save to say that she saw something George didn’t want to and she slipped. Yeah, that’s a much better explanation and doesn’t really encourage any further discussion. But having your mother bring it up in the hospital while berating you for the fact doesn’t really help matters. And come on, a woman getting a sponge bath in the next space over while you’re mother is still browbeating you doesn’t seem like the ideal hospital visit. If it does, you need help. Looking at you George.

So if our parents are the reason why we turn out the way we do, you now have a perfect explanation of why George Costanza is so uniquely neurotic.