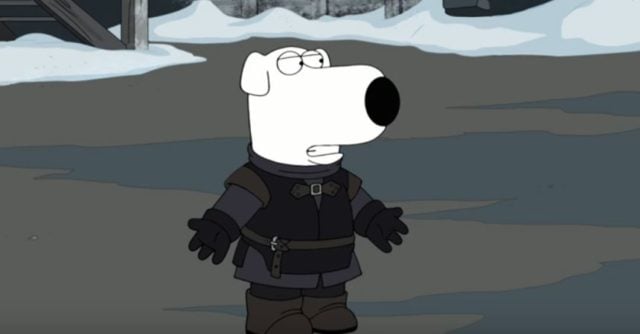 Family Guy is not a show that ever shies away from its pop culture references.  More times than not they take shots at every show, movie, celebrity and piece of world news that they can.  But in all its years it hasn’t really gone after Game of Thrones until now.  According to CB

The reference comes from the eighteenth episode of Family Guy’s fifteenth season, “The Peter Principle.” A conversation between Stewie and Brian to comment about his time in the Night’s Watch. This prompts a cutaway to a scene where Brian plays Jon Snow in the “for the Watch” scene that concluded Game of Thrones’ fifth season.

Peter also shows up with a “Hi, Brian,” before stabbing him and pointing out that he is Samwell Tarly’s boring storyline. Then Chris shows up claiming to be Ballers, the Rock’s sports drama that follows Game of Thrones on Sundays during the season. The Night’s Watch then stabs him, with even Chris admitting that he gets it.

You can always count on Family Guy to be ruthless and never hold back.  Game of Thrones talk is heating up as the show keeps getting closer to its July premiere date.  You can check out Family Guy’s references in the clip below: