Home
Television
What to Expect from My Mother and Other Strangers 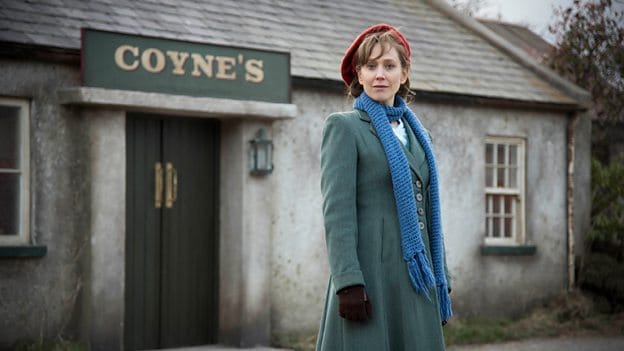 Given its name, it should come as no surprise to learn that My Mother and Other Strangers is a rather curious mix of the exotic as well as the familiar. In brief, it is set in Northern Ireland during the Second World War when hundreds of thousands of US soldiers flooded into the region in preparation for their participation on the Western Front. However, it is not focused on those historic events but rather the people who lived through them.

In particular, My Mother and Other Strangers is focused on Rose and Michael Coyne as well as their three children, Emma, Francis, and Kate. Furthermore, there is a liaison officer from the US Army Air Forces by the name of Captain Dreyfuss, who becomes the third pillar in a love triangle that threatens to shatter the Coyne family beyond repair. There are more characters in the drama than those that have been listed so far, but for the most part, these people are the ones around whom the whole of the narrative revolves.

Here are some of the things that interested individuals can expect from My Mother and Other Strangers:

My Mother and Other Strangers benefits from an interesting setting. In part, this is because the British drama is shot in a scenic location, meaning that there is lots and lots of visual interest for those who love to watch their favorite characters acting out their dramas upon beautiful backgrounds. However, it should also be noted that the basic premise means that there is plenty of things happening in said location, which makes it much more dynamic than it would be under other circumstances. The central love triangle is the single best example, but there are more examples as well, as shown by the Coynes’ daughter Emma’s own relationship with one of the US soldiers.

Drama works best when the characters are not just likeable but also believable. Fortunately, the characters who make up the central love triangle are believable, thus making the tensions in their narrative that much more meaningful in the process. For example, Rose’s interest in Captain Dreyfuss makes sense in light of the fact that she is actually something of an outsider in the village by birth as well as by background, with the result that she is feeling unfulfilled at the start of the series. As a result, when Captain Dreyfuss shows some of the same interests, it is no wonder that Rose becomes interested in him. Likewise, Michael’s general sense of dissatisfaction is unsurprising because there are hundreds of thousands of strangers who have brought an inexorable wave of change with them, which isn’t helped by the fact that most of them are young men with a keen eye set on local girls such as his daughter, while Captain Dreyfuss’s interest in Rose is unsurprising when there is a war going on that could see him dead at some point in the not so distant future, which often encourages people to find what happiness they can in the meantime.

With that said, people who are interested in My Mother and Other Strangers should not expect too much originality from it. After all, it is not a particularly novel plot populated by particularly novel characters. However, it is important for people to remember that originality is not the sole measure by which a particular piece of media should be judged. Something that retreads trodden ground can possess plenty of appeal, if perhaps not the same sort of appealing as something that chooses to strike out into the unknown.