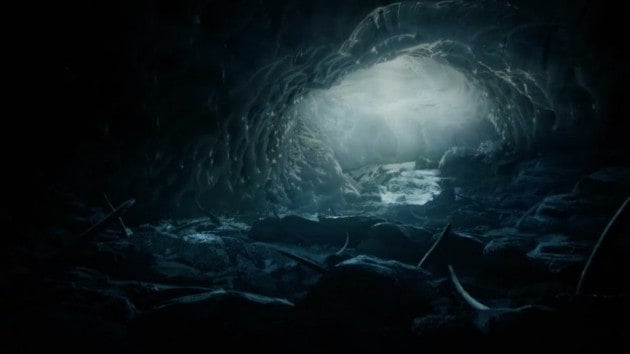 As the fires burn and the plague of wasps swarm around Fortitude, “Episode 12” is a season finale steeped in religious reflection, as the sinners of this desolate little Arctic purgatory look to the fire to burn away not only the zombie-creating prehistoric wasps, but the regrets and mistakes of their past. And in moments, “Episode 12” is the most hopeful episode of the show yet, igniting an important reconciliation and allowing many characters to finally find some semblance of peace – there’s even what many people would call a miracle, with Vincent surviving the massive gas explosion he creates to kill the wasps poor Doc lets out of her mouth.

The key word is “in moments”; at its heart, “Episode 12” suggests even darker things on the horizon, the characters of its titular town enamored by the slow motion, fix-it-all solution the flame offers them. It’s a seductive device, promising to burn away everything of the past, like it never existed – a little fire, and Ronnie and the mammoth carcass are no longer issues. A little more fire, and the roomful of wasps isn’t so scary anymore. “Episode 12” is about consequences, and how they’re unavoidable, no matter how far we run from them: Fortitude is the most isolated place in the world, but like the ice underneath them, it can only hold the darkness inside for so long. Eventually, ice melts: sometimes, that ice is metaphorical, a psychological device used to preserve a memory or state of mind, refusing to let go of a specific event, detail, or decision.

Other times, that ice is real. Along with its study of human nature, Fortitude is a show about the environment: after all, this cosmic, wasp-filled justice comes courtesy of Hilda trying to build a hotel on a moving glacier. Mother Nature is not kind, nor is she quick to adapt: most of all, Mother Nature is something we don’t understand – and as we continue to heat up the atmosphere, embracing the quick-fixes of the world and fueling the fire of pollution, eventually that’s going to come back and bite us. May not be today, may not be in a 100 years: the first rule of the universe is “for every reaction, there is an equal and opposite reaction.” This is a zero sum game no matter what, and the more we stretch the rubber band of nature, the harder it is going to snap back when it inevitably does. Have we stretched it to the point of snapping? Fortitude doesn’t offer an answer to this – instead, it frames the horrors of this in subversive ways, through rich characters and layered narrative that is less concerned about closure than it is making sure the cosmic scales are even.

Or a lack thereof: if anything, the third act of “Episode 12” points out how that scale is out of balance, possibly permanently. The mammoth graveyard has melted and started forming a plague (we hear the bugs that take down stupid, drunk Yuri), rendering any reconciliation between Hilda and Eric (or Vincent’s short-term survival) ineffective, a heartwarming moment that is cut short by Elena’s transformation (which… stops when she gets shot? A little confused there) and poor Dan’s inability to have a single good day, standing over his burning city with a tired, slightly frightened look on his face as large parts of the town he was sworn to protect, melts and disfigures itself.

That misbalance of karmic scales is what makes “Episode 12” feel like such an unsatisfying finale: there isn’t much offered in the way of closure, just a sinking feeling that things are not getting any better, even if the mysteries are (mostly) solved and the mammoth carcass is taken care of. “Episode 12” revels in its lack of resolution, instead engaging viewers with the overwhelming sense of dread from every non-ending: all Fortitude wants to tell us in the finale is that things are only beginning, that the true measure of their karmic debt will be revealed in its (recently announced!) second season. Cheap tactic? Sure, but how Fortitude employs it is genius, leaving the audience sitting on the edge of their seats, the only coherent thought is that while a few things have improved, nothing is getting better in this desolate little town: things are only getting worse, which makes every day in the snow-covered landscape a little harder to bear (no pun intended).

Everything is frozen in Fortitude: our lives (RIP Morton), our desires, our failures, which makes them all the more impossible to let go. Yet the more damaged we are, the more damaging we can get if we don’t face the truth – that central message applies to every layer of Fortitude, and the finale does a wonderful job capturing that, with its long shots of blazing fires and deep looks into the eyes of many characters (be it to the camera or each other), ending the most exciting new series of 2015 (so far) on a haunting high note.

– Thanks for joining me this season! I’ll be back in 2016 to cover (the sadly Morton-less) Season 2!