Home
Movies
Are We Ever Going to See a Hancock 2? 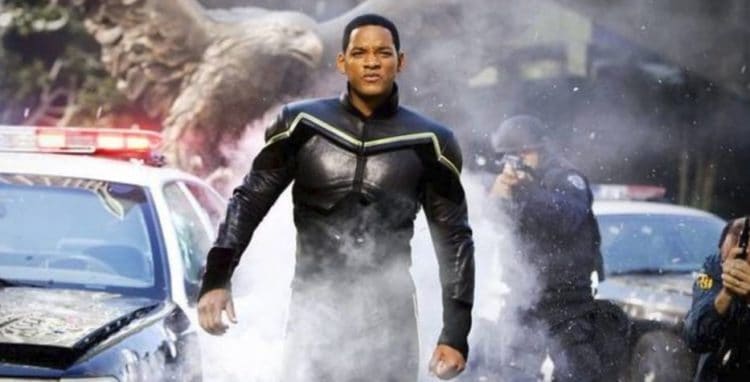 There might actually be people that say “No, please, just, no” to the idea of a Hancock 2 film since no matter if anyone liked it or not the film was kind of ‘blah’ when you think of Will Smith and how he usually is in his movies. The few glimmers of hope the movie had in it weren’t quite enough to keep it from being derailed by its own story and just about forgotten until someone decides to give voice to it once again. As Will Smith movies go it was perhaps one of the most underwhelming despite the visuals and the fact that his character turns out to be a god or at least god-like in many ways. It’s also important to point out that while it was about the titular character, the movie tended to focus more on the other individuals that were less important to the overall story than the main character. Of course they came in and showed their importance after a while but it was only after they kind of drowned out any story that Hancock might have really revealed about the main hero.

There have been words from Peter Berg, the director, about bringing this film back, but at this point it doesn’t seem like it’s moving forward all that quickly. If it does come to the forefront then it will likely be a surprise to a lot of people. The only question is whether or not it will be a pleasant one.

Despite the nature of the character, the movie was filled with plot holes and continuity issues.

This had to be one of the most disjointed superhero movies ever created, and that’s saying something. It had it’s brief moments of greatness when the story could have gone on to explain something about Hancock that might have shed a lot of light on who he was, where he’d been, the things he’d seen, and why he’d turned out the way he did. But instead of getting into that the story decided to move onto matters that were more oriented towards those fans that want action, drama, and little else. There wasn’t a whole lot of back story to Hancock as a person, at least not until the reveal by Charlize Theron’s character when Hancock was laid up in the hospital after being shot and actually wounded. At that point it simply felt too much like an afterthought, a “By the way” moment that should have been introduced a lot earlier in the movie.

If there was bound to be a sequel it needed to come a lot sooner.

Peter Berg supposedly had everyone on board to star in this movie years ago but things apparently fell through and nothing has happened since. If things are happening now then any word about it is being kept on the down low since there really hasn’t been a lot of chatter. In fact there have been more opinions and critical views of the original movie as of late while the talks of a sequel are still fairly hidden away. It might be a good thing really since if a sequel is to be announced any time soon it might need to come with a reminder of just why Hancock is still relevant and why people should care. The first movie did leave off with enough of a cliffhanger that indicated how the movie could keep going on, but then they would have to introduce characters that could contend with Hancock, meaning it would be another superpower beatdown in the making. The only problem with that? The superhero genre has been laying the smackdown on the big screen for the last several years, so another one added to the mix that’s not Marvel or DC could have a very hard time contending against either of them.

Hancock 2 doesn’t seem like it would be the answer to the first film that was needed, nor does it seem as though it would be the best cinematic idea ever made. But at the very least it could be a way to tie off the first film and give the titular hero another chance to step into the big leagues and finally become something other than the homeless and drunken vagabond he started out as. It’s true that he’d cleaned up his act by the end of the first film, but being away from the woman he loves, forced to walk the straight and narrow path, and yet still understanding that he was something other than human would have to be something that would have to be taken into account.

Right now in TV and cinema the tragic story and the eventual relapse seem to be the major trends that people want to see, so if Hancock 2 was to come out showing Will Smith as a successful superhero it could go either way, but it seems like the movie would be less than well-received.