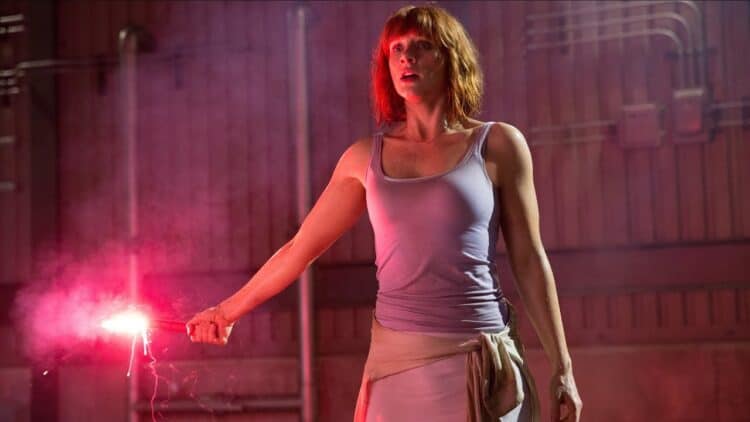 Yes, an explanation for the title is indeed coming, since it has more to do with something the issue that people call for realism and then ditch that idea in favor of a cool image. Bryce Dallas Howard has indeed made it known that she’s not apologizing for the scene involving her character in the first Jurassic World, running in front of T. Rex in heels. The truth is that she doesn’t need to apologize, but the idea of thinking that empowerment means letting go of all sense and reason when filming a scene is kind of amusing to be fair. For a while now, women have been seeking empowerment in the movie industry, and to be entirely honest, they deserve it. But what is funny is when moments such as this come along. People are for empowerment, as it’s necessary for everyone in a movie to feel strong, and confident, and to realize that they do belong to that particular story. But seriously, running in high heels is something that many women have scoffed at more than a few times throughout several movies.

It could be that some folks are more hung up on the idea that running in high heels isn’t as empowering as it is misleading since trying to run in heels is, let’s face it, something many women have admitted is nearly impossible since the danger to one’s ankles is bound to increase with each stride. That’s kind of beside the main point, but as one of the main examples it does stand out as a reason why empowerment is important, but it needs to walk hand in hand with practicality. There is a reason for this misstep though, and it has more to do with the situation that was filmed at the time than the actual need to be empowering. Let’s break it down, yeah?

Sticking with the Jurassic World example, the point of seeing Claire in heels is that she’s a strong woman, a confident character, and the heels are a part of her overall personality. Admittedly, that’s all well and good and nothing to argue about. But fast-forward a bit to the moment when she’s running from the gigantic creature, and somehow staying ahead of it for just long enough that the plot armor can work. It could very easily happen that Claire wasn’t in a position to stop and find a pair of boots that could fit and thereby give her better traction for walking around or running for her life. That’s kind of an easy explanation to be certain since the counter-argument could be that she might have found the time to procure a set of boots here or there, or even a pair of flats, that might have served her better. They went with the heels for a reason, even if it feels like a ridiculous reason, but it happens that the story might have created a reason why this works and why sticking with the heels was better. Empowerment is great, but when telling a story, it does stand to reason that there is a compromise that can be made between being empowered and being practical. After all, in Fallen Kingdom, Claire had finally wised up and dressed for the trip, which was entirely practical.

But again, as an empowered woman that had to present herself in a certain manner and couldn’t afford to look like anything but a confident and professional individual, the heels were a part of her everyday garb that couldn’t just be abandoned. But as the movie goes along, one might tend to notice that there were moments when empowerment might have easily given way to practicality and not suffered in the least since it would have been far more understandable than hearing the distinctive sound of heels clicking on the asphalt, which is a strange way to introduce a character as empowered in this situation. But that moment has come and gone, and harping on it over and over is kind of silly to be talking about over and over again. Instead, talking about how practicality in the movies can be the same as empowerment, and how the two can bring realism when they reach a compromise, is a better way to spend one’s time.

So Bryce doesn’t want to apologize for the scene? Okay, it wasn’t really needed. But when talking about empowerment, one has to think that practicality can be every bit as empowering as anything else, especially when it can improve one situation in a movie or another. The idea of ’empowerment’ has become as overreaching as many other terms have done over the years, but the truth of it is that women in action movies have been seen as empowered for quite some time, so the thought that they need to strut and show their authority and ‘power’ in ways that don’t make sense in one situation or another is a bit silly, instead of inspirational.