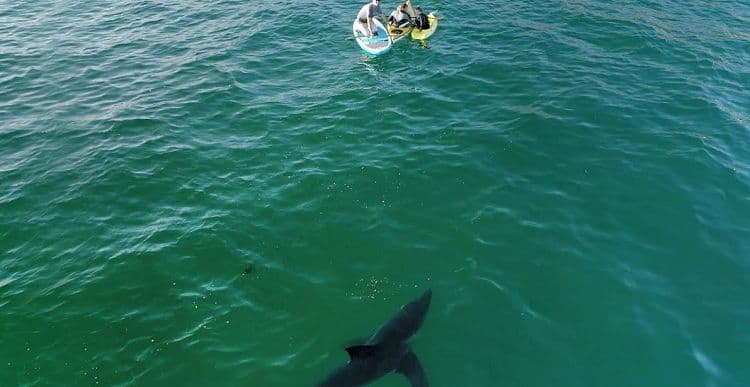 There’s been a ton of discussion circulating around great white sharks over the years and a lot of it tends to revolve around the idea that they’re mindless eating machines or apex predators that will attack anything they think is food. The reality of this is that sharks don’t generally attack humans unless it’s a case of mistaken identity, meaning that the shark thinks that the human is a seal or a tortoise, something they might naturally target as part of their normal diet. This drone footage shows what could terrify a lot of people since the mere mention of a shark is enough to keep some folks well away from the water and not even think about the ocean for a certain length of time. But the fact is that sharks don’t really attack as they do in the movies, and in fact, they won’t attack unless they’re provoked or there’s some other reason that they happen to be in an aggressive mood at that time. It feels safe to say that intruding upon a shark’s meal wouldn’t be wise, and neither would sticking around during a frenzy if it happened, but on the regular, sharks don’t simply get it in their head to attack people for no good reason. People would obviously ask why shark attacks happen then, but the explanation is the same, that they take a bite out of something to test it and see if it’s food. Obviously that’s not something that people want since ‘testing’ for food when it comes to a shark means that the object they’re testing is going to be missing a chunk of flesh once the test is done. And yes, blood in the water will attract sharks, but amazingly enough, human blood isn’t bound to rile up a shark since they typically go after fish, sea lions, and other animals that are part of their normal diet.

Some might feel comfort in knowing that there’s someone out there watching for sharks with a drone since the truth is that human vision on the water is limited, and as evidenced by the drone footage, people would know if a shark was right next to them. But one thing that any shark enthusiast or marine biologist will tell you is that there are a few things one can do when a shark is around. Remaining calm is one of the best things to do since anytime a predator senses distress or fear it becomes agitated in a certain way. Have you ever seen a cat give chase to something that’s running? It’s more or less like this, since the need to give chase, pursue, and capture, is a predatory trait that quite a few animals possess, and a shark will be attracted to a human that’s attempting to swim quickly away. The best thing to do if one does see a shark nearby is to remain calm, since there’s a good chance that the shark won’t care too much about you and, worst-case scenario, might come close to check you out before swimming along.

There are folks out there who would likely claim that they would know if something as big as a shark is nearby in the water since it would be impossible to miss. But unless the shark is right up next to a person, or makes itself known, then there’s a good chance a human being would never know they were there. The reason for this is that even with clear waters, sharks aren’t foolish enough to engage with an unknown entity, meaning humans, if they don’t have to. They might be curious, they might hang around for a bit, but unless there’s an incentive to attack, which it’s wiser if no one ever gives it, then they’ll likely swim away after a while. Apparently, younger sharks are more commonly seen to attack than older sharks, which makes a bit of sense considering that younger sharks are still in the process of learning how to react around certain animals and objects while the older specimens have been there, done that, and don’t often mess around with something they can’t immediately understand.

The fear that’s been generated when it comes to sharks is unfortunate since while they are a bit off-putting in terms of looks and what they can do, sharks are a necessary part of the aquatic world that do serve a purpose. They’re also rather interesting creatures that are still given a bad reputation by many movies and TV shows that use their fearsome appearance as a means to create a way to horrify the public and make certain that we don’t trust the creatures that much. In truth, a human is likelier to be struck by lightning than they are to be attacked by a shark.