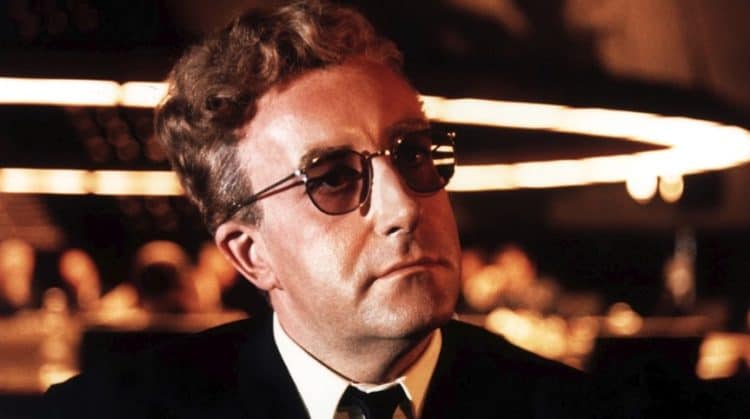 Dr. Strangelove Or: How I Learned To Stop Worrying And Love The Bomb personifies the acme of gallows humor. The 1964 film is configured around the most humorless of subject matters yet succeeds in advancing the narrative by highlighting the absurdity of human nature. The film’s director/visionary achieves comedy where there should be none – thus the comedic genius of Stanley Kubrick. “He was a satirist, and while the comedy in his films was not always blatant, it becomes more apparent when seen through a satirical lens” (Bria).

Dr. Strangelove is not a comedy yet has been expertly described as “incredibly funny” (Thurman). The film tells “the tale of a bunch of all-powerful maniacs, plunging the world into nuclear destruction through a mix of paranoia, patriotism, and plain stupidity” (McCarter). The reason why Kubrick’s masterpiece is considered a comedy classic is simple – he did not shoot the film as a comedy. Kubrick’s humor materializes organically as he illuminates the insanity of the political and global atmosphere of the times. After all, “making light of world annihilation is serious business, and Kubrick treats it as such” (D’Angelo). Humor emerges based upon character action because every character essentially serves as a straight man deriving comedy from the shear ridiculousness of circumstance. As a result, what is achieved is the desired effect of pure satire “that comes with exaggerating a situation enough to be able to step back from yourself and have a laugh at the absurdity of it all” (Roberts).

One way that Kubrick emphasizes the satiric tone of the film stems from parallel segmentation through the use of register shifts. Dr. Strangelove is a picture that functions with the threat of total global annihilation as its central thematic currency however the entire picture uses only three settings. Each of the three settings, Burpelson Air Force Base, The United States’ War Room, and the interior of the deceived B-52 Bomber, serve as the bare palate for the satiric element of irony to materialize. Because the settings are segmented, essentially each setting exists independent of each other. This serves two purposes: First, it allows each setting to establish and maintain the dramatic gravity justly associated with each situation and second; because “Kubrick maintains the same tone throughout cuts, his cuts are constructed to unite the scenes into a cohesive narrative which the audience understands more fully than any of the characters in the three settings” (Gradesaver). Since the audience is aware of each character’s actions and can appreciate the scope of the situation, the audience always understands more than the characters resulting not in farce, but satire. The brilliance of Kubrick’s editing techniques is illuminated as he uses the three settings interchangeably to advance the chronological narrative of the film while never relinquishing the dramatic, suspenseful tone. The mood of thriller is always maintained but by segmenting the film, comedy is the result because satire is achieved.

The segmentation of Dr. Strangelove is also greatly accentuated with Kubrick’s effective use of the musical score to shift the film’s register. When the setting of the B-52 Bomber is used to advance the narrative, the register shifts to “that of the spectacle” (Belton). The spectacle is comprised by the musical score that accompanies the B-52 Bomber. When the setting of the B-52 Bomber is displayed, the scene is nearly always set against the background music of The Battle Hymn of the Republic. No other setting is set against this background music. Thus, when the setting of the B-52 Bomber is enacted, a noticeable shift in register occurs. The Battle Hymn of the Republic is American patriotism set to music. Within the song’s lyrics, such lines appear as “He is trampling out the vintage where the grapes of wrath are stored” and “As He died to make men holy, Let us die to make men free”. By using the Battle Hymn as spectacle, associated only with the B-52 Bomber setting, it represents the somber American tenet that the only issue of any importance is the completion of the mission, completion at any cost (as seen via Major Kong’s efforts to deploy the bomb). The Battle Hymn serves to highlight “a crew of intrepid American soldiers daring against all odds to bring the wrath of God and the U.S.A down on the foes. The irony, of course, is that the brave soldiers have been tricked by their commanding officer” (Shmoop). Viewed in a vacuum, the audience would believe, as “Kubrick led Pickens to believe, that the film was supposed to be a serious war drama” (Arbeiter). However, when taken as a whole, the shift in register serves as yet another cinematic device deployed by Kubrick to emphasize the sober mood of the narrative resulting in a satiric tone. Kubrick also incorporates blatant change in register to end the film as he uses Vera Lynn singing We’ll Meet Again as background music over a montage of nuclear bomb explosions exemplifying the definition of satire.

With Dr. Strangelove, Stanley Kubrick tells a serious story in a somber fashion with comedic results. This must have seemed impossible at the time considering the volatile political climate. The Cuban Missile Crises took place a mere 15 months before the film’s premiere. The Red Scare was palpable. It was real. It was almost tangible in the American consciousness. The apocalypse was a plausible fear and a legitimate threat, yet “the military becomes the source of dark humor in Stanley Kubrick’s apocalyptic Dr. Strangelove” (Belton). “Strangelove‘s comedy is primarily verbal and character based” (Bria) and by illuminating just how absurd the serious actions of sincere characters are, Kubrick flawlessly shows the essence of satire by using human nature as the punch line. Dr. Strangelove is undoubtedly the work of a comedic genius but it does not require comedic genius to appreciate the satire associated with the film; a film where the apocalyptic threat is rooted in the antagonist’s genuine belief that “Fluoridation is the most monstrously conceived and dangerous communist plot we have ever had to face”. An antagonist named Gen. Jack D. Ripper.