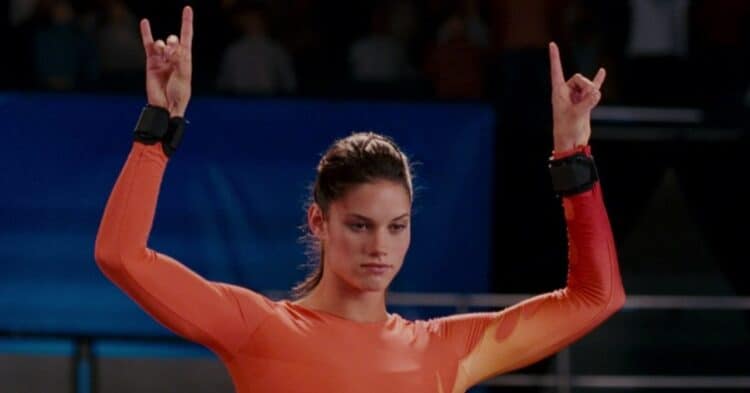 One big failing of some sports movies is that they’re not accurate and they stick actors in positions where they’re bound to look a little foolish since the technical details of a sport require enough attention at times to appear genuine. Some sports manage to inspire one movie after another and as a result, things tend to be glamorized quite a bit, and people tend to let little mistakes go here and there. When it comes to gymnastics, however, the same thing might still happen, but it’s more likely that people let things go because they don’t know enough about the sport. But watching this movie made it feel as though gymnasts go through hell to do what they do, and the truth is that some think it was accurate, and others actually grew angry at the movie for the dramatization that occurred throughout. It does feel that some folks lost the point of the movie, that the gymnasts were attempting to take back the sport that they loved, but the fact is that many look at gymnastics as something that demands absolute perfection, and the drama portion of this movie made it clear that the young women were tired of this.

Of course, this isn’t realistic since gymnastics is demanding and the kind of behaviors seen in this movie wouldn’t be accepted. But that does shine a light on the sport since it indicates that things are taken a little too seriously at times and whether people want to admit it or not, this can affect a young woman in a big way. There’s nothing wrong with discipline and a quest for perfection, but the unrealistic expectations this puts on people are just as damaging as any injury that might occur during a meet or a practice. This is where people apparently lose the point of the movie since it was definitely seeking to send a message that now and then, gymnasts do get tired of the continual expectations forced upon them. It’s true that scratching intentionally in a meet, particularly a big one, is not going to happen, but it’s a movie, and this is where anything goes sometimes.

So, does the movie hold up? It kind of depends on who you ask to be fair since even hardcore gymnasts might fall on either side of the argument given that there is a lot of truth to this movie, but it does veer wide of the mark at times. The training does look intense, and for anyone that’s ever been in a gymnastics studio, perhaps watching their daughter or maybe coaching or volunteering, the truth is that these young ladies do train at a level that many couldn’t keep up with. From a young age, these ladies do learn to push themselves to new heights that are exceptionally challenging, since it becomes evident that the human body is capable of great things so long as one is willing to put in the work. But what this movie does as well is to show the insane amount of mental stress that comes with the sport since it is ruthless and it doesn’t always care what kind of stress a person is under.

Some young ladies will buckle, there’s no denying this, and others will surge forward without hesitation. In a big way, this movie injected attitude into the sport in the same way, kind of, that Happy Gilmore did for golf. In other words, it was a fun movie that showcased a few interesting points about the sport but wasn’t about to change things simply because the movie was that much fun. It might have opened up a few minds concerning how hard the sport was conducted, but at the end of the day, this didn’t seek to change gymnastics, it only wanted to tell an entertaining story. So in a way, it does hold up well enough since it’s a fun movie that wasn’t out to change anything but was bound to show people that yes, gymnastics is tough, it’s demanding, and those that want to find their way into the sport are going to find that it’s not a passing hobby, it’s a quest for greatness that requires a lot of self-sacrifices.

In a big way, this movie was one of those that was needed at a given time since it allowed people a look into a world that they might have seen on TV already if they’d ever watched the Olympics. But as to its accuracy, it does break down at some points since the general attitudes and behaviors are dramatized in a big way. Gymnastics can be brutal since a lot of competitors are out to do their best and don’t always share the same level of camaraderie, but the general idea is that the movie does show both positive and negative aspects of the sport. Those that show a great deal of hate for the movie might need to calm down just a bit.