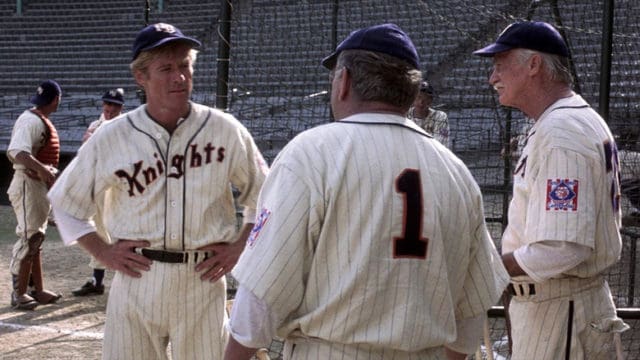 Sports movies aren’t always entirely inspirational since sometimes they can be fun and engaging as well without having to really bother putting too much sappy and motivational moments in there. But a good number of them have some quality that inspires people and allows them to think that with enough training, desire, and heart, that anyone can step into the shoes of a professional athlete or at least aspire to being someone that people will remember. Many such movies tend to be based on individuals or teams that did in fact exist in the past, but often their stories are tweaked or embellished to make the movie a little more popular with the audience. In this case it becomes a fictional biography that people can get behind but should be aware isn’t the whole truth.

It’s enough that the movies are simply that good and can pull at the heartstrings though.

Achieving greatness is long, hard road sometimes that has a number of pitfalls that any athlete can fall into. As Hobbs struggled to find his way in baseball however he stays the course and doesn’t bend or fold when it comes to his integrity, even when it tends to damage his reputation and his health. But near the end of the film his determination is seen to pay off as he tattoos a pitch into the lights, winning the game for his team.

Despite the choreography that went into this film Stallone still managed to take a lot of punishment throughout the series and had to be hospitalized at some points. Rocky was the guy you rooted for even when it seemed like he didn’t have a chance since his opponents were almost always bigger, faster, and much better at the sport. But throughout it all only a couple of them ever had his level of heart.

A lot of this story was fictionalized in order to make it a little more marketable and worth Disney’s time, but the point got through at least. No one would have ever expected Jamaica to field a bobsled team considering that the county is devoid of the kind of cold temperatures that are needed to train. The look on the guys’ faces when they reach Calgary is just priceless as it’s the look a kid might get when seeing the world fully for the first time.

2. A League of Their Own

Any thoughts that a person might have when it comes to saying that girls can’t play baseball were finally put to rest when this movie came out. Despite the fact that many women might find it difficult to match male athletes in their prime, there’s nothing to say that women can’t play the same sports and be just as successful in their own right. As far as crying in baseball goes, men do it too, they just don’t like to admit it.

It’s true that following your dreams can hurt you and everyone around you if things don’t seem to work out immediately. But the real individuals that will follow their dreams are those that are willing to tear themselves and everyone else to pieces in order to get to where they want to be. It might seem selfish but the only other option is to lay down and die when people tell you that your dreams are foolish and impossible. That’s simply not acceptable.

Dreams are the reason we keep going.