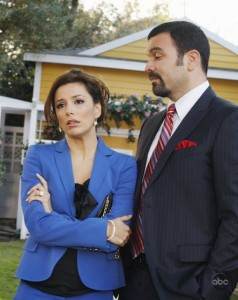 Desperate Housewives this week was kind of lacking and I blame Dollhouse for me feeling this way. I guess after having a whiplash worthy reveal in the latter show spoiled me in some ways, because we really didn’t learn anything new tonight with the residents of Wisteria Lane. Well, we did learn some new tidbits, but nothing buzzworthy. Now while the episode was obviously filler, that doesn’t mean that it wasn’t good. It just pales in comparison of Dollhouse‘s big reveal this past Friday. But alas, who cares about that? Let’s get down to what you are really here for…

It’s been a month since Karl’s death and it is now time for the reading of the will. Karl left Julie a nice chunk of cash in securities, but the shocking thing is what he left Susan. Turns out that Karl was hiding money from a business that he co-owned and started while he was married to Susan and left the business, which is booming, to Susan. The business? A strip club!

Somewhere in Heaven, Karl is laughing his ass off… Granted that he ended up in Heaven.

Susan goes to check the joint out and gets an even bigger surprise when one of the strippers recognizes Susan’s last name, Delfino, and let slip that Mike is a regular.

Susan confronts Mike about it and when he says that he is only the strip club’s plumber, Susan thinks that he also enjoys the place’s assets. She forbids Mike from going back to the club, but Mike doesn’t take kindly to that and makes it clear to Susan that she can’t forbid him from doing anything.

After a humorous talk with Mrs. McClusky, Gaby, and Lee, who all play into Susan’s suspicions of Mike enjoying the sights of the strip club, Susan decides to take matters in her own hands. After calling Mike to the club for an emergency plumbing problem (pretending to be someone else), Susan takes the stage of the club and begins to strip to Mike’s horror. Susan is down to her undies when Mike gets the message and says that he will not work for or attend the club ever again. The two go home where Mike receives a private strip tease from Susan.

Bree confesses her infidelity to Reverend Sykes, who tells her that despite telling him her sins, she has to make matters right if she wants to rediscover her faith, which means taking care of Orson when he is in need. But Orson doesn’t want Bree’s help and is going through with the divorce. Bree ignores Orson’s wishes and has Mike install a ramp on the front door of the house, but is shocked to find that Orson has checked out the hospital and moved into Mrs. McClusky’s place. Bree rolls Orson back to their house.

Later while talking, Orson reveals to Bree that Reverend Sykes stopped by and accidently let slip that Bree is basically helping Orson for charity, which Bree denies. She claims that she is genuine in her concern for him, which Orson (who really needs to be checked for bipolar disorder) decides to put Bree to the test by making all kinds of demands from Bree, who is again a prisoner in her own marriage.

Carlos and Gaby buy the Scavos a 60-inch plasma and other things for saving Celia, but before I can fix my mouth to say that a plasma TV can’t feed six mouths, Carlos announces that he has had the HR department to pay Lynette while she is on leave. At the mean time, Carlos will pick up all the slack and love it, because he still feels that he owes Lynette big. Then Tom comes up with a better idea: let him work in Lynette’s place until she returns to work. Carlos and Gaby thinks that is a wonderful idea. Lynette, on the other hand, is being Lynette and finds something wrong with the solution, but goes with it… for the moment.

After Lynette looks over a proposal that Tom has shown her boss, she is floored when Tom reveals that the boss loved the proposal, calling it one of the best “bar none”. Lynette feels threatened and goes to Carlos for answers, because she is not buying that Tom is actually adequate at her job. She asks Carlos if she is out of a job, which Carlos says she’s not and that he was under the impression that Lynette was going to be a stay at home mom once the baby was born. So not what Lynette wanted to hear…

Lynette confronts Lynette later that night about trying to take her job, which Tom says he wasn’t trying to, but that it would be in best interest for Lynette to stay home with the surviving twin. He goes on by saying that they should be sharing the grief instead of pushing the elephant in the room under the rug, but Lynette says that talking about it isn’t going to make anything better or easier so why bother. Tom, stunned, decides that Lynette is ‘right’ and that she can have her job once she is able to get back on her feet. He then takes a bottle of wine and decides to drink his sorrows away. Sad…

After getting Juanita an interview at the school that Susan works for, Gaby and Carlos are thrilled when they find out that Juanita is a high prospect for a spot at the private school. The dean even says that it is good to have some diversity, which they are sorely lacking. When Carlos and Gaby say how proud they are of their Mexican heritage, Juanita balks at the horror of being Hispanic, because she didn’t that know she was. Wait, it gets better…

After feeling that they blew their chances with the school, Gaby and Carlos ponder why Jaunita think she’s white. Then they have a small look around their neighborhood and their answer becomes crystal clear.

Later, Gaby tries to get Carlos to celebrate that they actually got a spot in the school, but Carlos bursts that bubble when he says he wants Juanita to go to a school that is predominately Latino. Gaby claims that she doesn’t want to Juanita to go somewhere so far away so she can be near those people. Carlos picks up on the last bit of that sentence and calls Gaby out on her self-hate for being a Latina, which Gsby balks at before throwing a beverage in his face.

A few hours later, Gaby comes across a box of pictures that show her upbringing, photos that Carlos never saw. Gaby then says that despite smiling, but growing up she always thought poor equaled Mexican and that she had to get out. She also says that she doesn’t want her daughters to know about her past. Carlos spots a picture of Gaby’s father and uses it as a basis to show Gaby that her father worked hard to get Gaby where she is now and that he sacrifices his dreams for Gaby’s. Carlos sums it up that the reason why all of them are there is because of the determination of a strong Mexican man like her father and that’s why he wants their kids to know where they came from. Gaby agrees.

Eddie invites Julie, Danny, Parker, and Ana to a stand up show that he’s doing. Julie and Danny don’t want to go and bond over that fact. Julie tells Danny that she is taking the money her father left her and is going to stay with some cousins until the stalker is captured. For my theory on who that is, read here. Julie then asks Danny if his suicide attempt had anything to do with her, which Danny replies that it did in a way, but that he is over that. Julie says she’s glad.

As Ana and Julie prepare for the stand up show, Ana begs Julie to hook her up with Danny since he is feeling Julie more than her. Julie warns Ana that Danny is a little intense and shouldn’t be treated as some flavor of the month, which Ana delcalres she won’t.

At the comedy show, Eddie tanks it and Julie initiates Operation Hoop Up, which left Ana and Danny at the table alone. Danny declares he has to use the bathroom all of a sudden and Ana gets frustrated and blurts out his suicide attempt. Danny looks hurt, but then turns the tables around and flirts with Ana, but only to make Julie mad I bet.

– Gaby’s storyline was… I don’t know. It was a very good character analysis, but I never got the impression that Gaby hated her heritage. But the only thing that puzzles me is the bit about her father. Is he still alive? Because I remember Gaby saying that she ran away from home because her stepfather came on to her. Maybe I missed something?

– Lynette is totally losing it. She can’t leave well enough alone and makes matters worse. Poor Tom. It’s like Roy was showing Tom the crap that was to come if Tom didn’t grow some balls. Is it too little too late?

– That’s all the thoughts I have for this week. Tune in next week!!!!