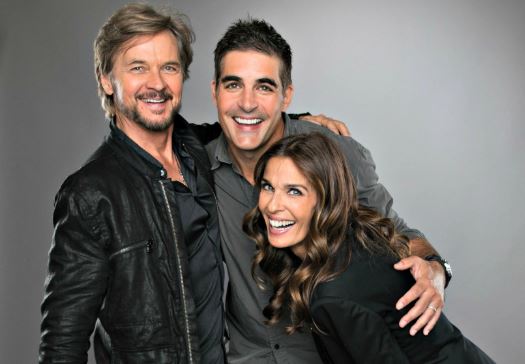 Days of Our Lives fans got to spend some time yesterday learning who we would love to see return from the dead. There are so many people who came back here from their death beds and made us all so happy for so many years. We have people who have come back from certain death, from uncertain death, from kind of death. From death we knew wasn’t real but the people on the show had no idea wasn’t real. There are a lot of people who could come back from their deaths around here, and we want to focus on a few of our favorites. Sometimes it’s difficult to miss someone when they’re gone, but we’d love to remind you that anything is possible by reminding you these people were dead before.

Do you remember when thing went a little bit south for her? She was just married to her husband, Chad, they already had a son together, and her entire life was shot upside down? Her mother was not a fan of her husband, her past was still haunting her. Ben was coming for her every single chance he had to come for her, and we all wondered if there was any way she would actually make it. She was then taken by Andre — her husband’s brother — who faked her death in a plane crash. Everyone thought she was dead for so long. Her mother fought her husband for custody of his own son and won. Her husband fell for his ex, again, and things were crazy and unfortunate and ugly.

But we knew she was alive. And then she came back and things turned into an even bigger mess than we imagined. She wanted her husband back, didn’t get him, married her husband’s new girlfriend’s brother, who kidnapped her, and then she ended up losing her mind. It’s been fun.

Remember when Sonny and Will were finding their marriage didn’t work anymore after Will cheated with Paul and then Ben killed him? Well, Ben didn’t kill him, but we know what we mean. Suddenly, years later, he’s back with no memory of his life before today. He didn’t know who he was, and no one knew he was alive until Ben escaped from prison — again — and managed to ruin Abby and Chad’s and Sonny and Paul’s dual wedding. It’s been an ugly mess from the start, but Will is back from the dead.

That brought his mother back from her new life. A little girl got her father back, and someone somewhere is upset by all of it. He’s getting his memories back now, he’s trying to make things work with Paul again, but he’s still in love with Sonny. It’s a mess, but we love every second of it. He’s been going around making his own life complicated, but fans are so glad he is back to do that.

Remember when the Salem serial killer took down just about every main character on the show and fans were basically dying? They killed virtually everyone in the entire land, and it was horrifying for fans. We didn’t know if there would still be a show with the number of people dying. They were choking on their own food, being eaten by wild animals, and other crazy, insane, obnoxious things. They didn’t have much else to do or say for themselves, but they did have a lot to offer. Things did not go well for them, and they were all dead.

But then they all came back. It turned out not one of them was dead in the first place. They were all alive and well and living on an island that Andre created that was exactly like Salem, and they were all together. It was the strangest, creepiest, most insane thing any of us ever saw. We didn’t know what it meant, how it worked or what was going on. But it worked out in the end when they all got to come back and no one was dead. We appreciated that so much, and it’s one of those things you didn’t see coming and didn’t realize was actually happening.