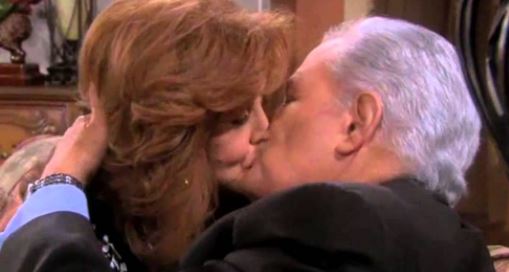 Days of Our Lives fans are excited the new week is going to bring a chance for Maggie and Victor to reconcile. They’re love is not in the place it was before, and they have to find a way to make it work. She left him because she doesn’t approve of what he and Brady are going to Eve, and she gave him a warning. He did not heed her warning, and that made her angry. She’s going to give him another chance, but we have a feeling she is not going to make his second chance easy on him.

Maggie is a strong woman. She might not be as bold or as brash as other women, but she’s not afraid to get what she wants and tell people what she expects of them. She’s not someone who will go sit in the corner and let things happen around her. So she’s not going to allow Victor a chance to mess up again.

Will he be able to meet her needs and figure out what is going on in her life? Can he meet her expectations and do the right things? Or will he find a way to mess things up again for her? He might not realize just how serious she is about this, but he will learn before much longer. Maggie isn’t a fan of second chances after a second chance, so she might not be willing to overlook another mistake on his part. Can he do it?