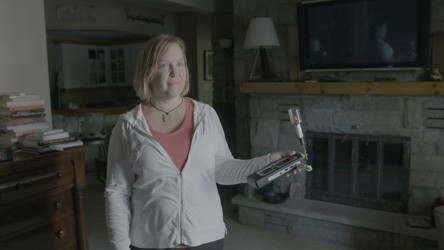 After the spectacular first two episodes, Showtime’s Dark Net has had a couple of weaker (but still strong) entries that have left a little to be desired. Let’s take a look at this week’s new episode (Season 1, Episode 5), titled “Trapped,” to see if things are back to where they should be.

As with every episode of Dark Net, “Trapped” tells a few different stories based around a general idea. That idea here, as you can tell by the title, is the idea of being trapped by (or because of) the gigantic prevalence of technology in the word today.

The first story is about Melissa, a former pilot who suffers from electromagnetic hypersensitivity (very similar to Jimmy/Saul’s brother on Better Call Saul). This hypersensitivity, which almost no one took seriously at first, is brought on by things like electricity and wireless signals (like WiFi), causing Melissa and her husband to live in virtual isolation in order to cope. One way that Melissa deals with her condition is through frequent pilgrimages to Green Bank, West Virginia, the only official WiFi-free zone in the United States. On average, Melissa says that she spends two weeks out of every month in Green Bank, and this knowledge helps you realize just how much of our world is connected to the internet. With Google’s plan for global connectivity, it’s easy to see that hypersensitives may soon have no relief at all.

The second story in “Trapped” is that of Henry, a man who, after suffering a massive stroke at the age of 40, now uses adaptive technology in order to get through the limits of his body and environment. Whereas technology is the problem for Melissa, technology is the answer for Henry, as it allows him to live a form of life that, while not perfect, still gives him the ability to function and be present in his family. The idea that technology can do this (and the understanding that it will only improve over time) juxtaposes extremely well with the previous story. While Melissa feels trapped with technology, Henry is trapped without it.

The final story is about the family of a girl named Marissa, who joined what is essentially an online cult and ended her relationships with her parents. The most frightening thing about this story to me is the realization that a cult atmosphere and mindset can so easily be cultivated through the use of the internet. With just a camera and YouTube, someone can bring countless others over to their own (often misguided) way of thinking, and it’s heartbreaking to see the effect that it can have on a family like Marissa’s. With this story in particular, I love the detail that the producers went into in order to help the audience really understand what happened.

“Trapped,” just like the first couple of episodes of Dark Net, was incredibly captivating and really did a much better job at explaining each of the stories that it told. I do think that the editing (or sequence of events) in the episode was a tad distracting (particularly with Melissa’s story about hypersensitivity), but the episode overall was extremely successful.

What did you think of “Trapped?” Are you still hooked by Dark Net? Let us know your thoughts in the comments down below!

“Trapped” brought Dark Net back to the standard set in the first two episodes, and a little odd editing didn’t at all take away from the overall idea presented.