Home
Television
Dancing With The Stars
Dancing With the Stars: Ryan Lochte Protesters Arrested, Watch Footage of the On-Stage Incident 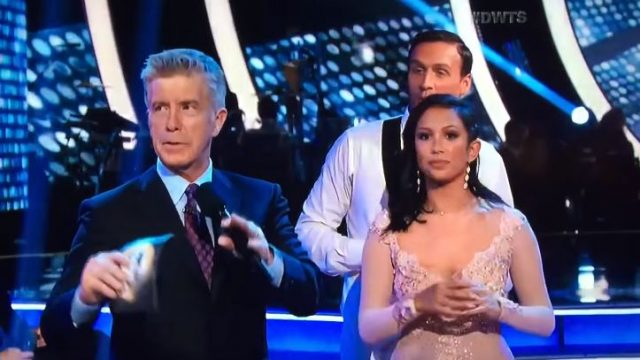 Something that has never happened before on Dancing With the Stars actually occurred last night, as the reality competition series was forced to quickly cut to commercial after an incident involving Olympic swimmer Ryan Lochte. While judge Carrie Ann Inaba was sharing her thoughts on the dancing performance of Lochte and his pro partner, Cheryl Burke, she suddenly stopped giving her remarks and started to repeatedly say “Excuse me!” to people that could not be seen on camera by the audience. Tom Bergeron quickly tossed to commercial break, and when Dancing With the Stars returned, the situation appeared to have been resolved.

Now it has officially been revealed that the incident involved two protesters that raced onto the stage, targeting Ryan Lochte. The two men, Sam Sododeh and Barzeen Soroudi, wore anti-Lochte shirts and were part of a larger group of Lochte protesters, who were escorted out of the studio after Sododeh and Soroudi charged the stage. Of course, people will remember that Lochte was a major source of controversy during the summer Olympics in Rio after he told police he was robbed at gunpoint at a Rio gas station, even though video evidence showing him and other members of the U.S. Olympic swimming team suggested otherwise.

Both Sododeh and Soroudi were taken down by security as they entered the stage and were later booked on trespassing charges, according to KABC-7. You can watch the video of them being tackled by Dancing With the Stars security below:

Following the incident, Carrie Ann Inaba posted this photo and message to Instagram, thanking the Dancing With the Stars security team.

We had a bit of a scary moment during tonight’s live taping of @dancingabc, but thanks to our security team and incredible staff at #DWTS, no one got hurt. Only positive energy here tonight and always. Thank you. #dancingwiththestars #security #grateful #dwtspremiere #dwts23 #dwtspremiere #premiere

Additionally, Dancing With the Stars pro Derek Hough told People.com, “This is a safe place for people to learn a new skill and seek redemption or start a new chapter in their life, and that’s what Ryan is trying to do, and I just felt so defensive that someone would try and ruin that for him and for everyone watching.”