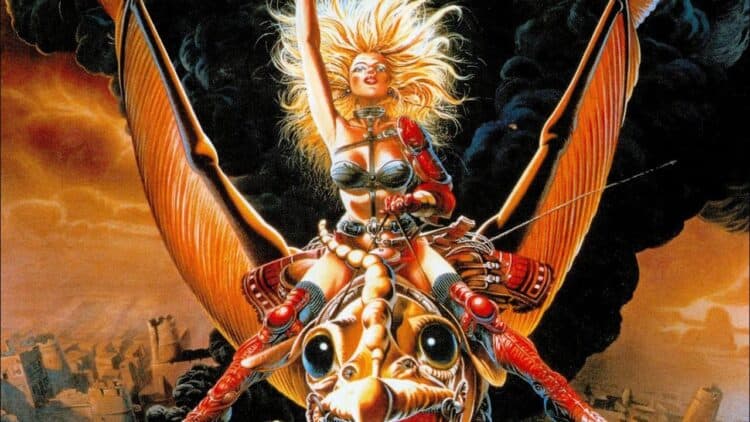 Is Heavy Metal the greatest animated cult movie of all time? It would be hard to argue with that on multiple fronts. In the 41 years since its release, this 90-minute, adult-oriented animated anthology film has received strong praise for its innovative rotoscoping, 2-D animation, its mature and graphic tone, and one of the best movie soundtracks ever. But what is it about the movie that continues to enthrall and delight audiences all these decades later? You would have to see it to believe it. For many years, Heavy Metal was one of those rare movies that eluded audiences who wanted to see it but never could. A home video release did not occur until 1996, thanks in large part to rights issues concerning its rock and metal-filled soundtrack. So unless you were lucky enough to see it in a theater in the early 80s, or catch it the handful of times it aired in the early AM hours on premium cable throughout the 80s and 90s–(bootleg VHS recordings of these airings went for hundreds of dollars )–the movie remained an almost mythical enigma. But even if you have seen the movie and find it overrated or juvenile, there is no denying its influence on adult animation.

Heavy Metal is titled after the magazine of the same name. The magazine premiered in 1977 as a monthly and featured exquisitely drawn and well-written stories from a wide range of subversive illustrators and writers. Thanks in part to the success of the magazine, as well as the adult-animated films of Ralph Bakshi, the rise of Anime in Japan, and the success of midnight movies like The Rocky Horror Picture Show (1975), Columbia Pictures greenlit the production in the late-1970s. Gerald Potterton directed and Ivan Reitman produced, and the film drew together a wide range of acclaimed animators from across the world. Rotoscoping was a 2-D animation style that allowed artists to draw and illustrate based on the real-time acting of various actors on live sets. The result was an animation style that was raw, gritty, and exaggerated but still maintained a level of realism that made it perfect for more mature animated projects that depicted human characters interacting with one another in realistic environments. The film used the voice talents of John Candy, Eugene Levy, Harold Ramis, Richard Romanus, and more, long before they became famous. But the biggest star of the movie was by far its soundtrack, which featured a large collection of popular rock and heavy metal artists of the period, including Cheap Trick, Sammy Hagar, Blue Oyster Cult, and Stevie Nicks, Black Sabbath, and Don Felder.

The movie contains 7 different stories which revolve around a mysterious green orb that is the personification of evil throughout the universe. An opening and closing segment, known as “Soft Landing/Grimaldi” serves as the prologue and epilogue to the entire movie. But it’s the stories in-between these bookends that are the ones that everybody remembers. A particular favorite of mine for years has been “Harry Canyon,” which features what is perhaps some of the best rotoscoping animations of all time. Richard Romanus voices the title character, as a disillusioned NYC taxicab driver in a futuristic, dystopian NYC of 2031. I will never forget the first time I saw this segment on cable TV around 4 in the morning in the early 1990s. The mature and graphic violence, nudity, and sex were absolutely mind-blowing outside of what we came to expect from animated films at the time. Another stand-out story is much shorter, and features practically no dialogue known as “B-17.” Once again, the animation used here is creepy and incredibly gritty as the story depicts a WWII-era B-17 bomber plane that becomes overrun with flesh-eating zombies. The tone of the sequence is a masterclass in both suspense and horror, and Bernie Wrightson’s incredible animation is unforgettable. All of the stories in the film are entertaining and fulfill both the thirst for fantasy and excitement that many of us felt in the time before the internet and devices occupied our every waking minute.

Many fans of the movie frequently cite problems with the final story of the film, titled “Taarna,” which also occupies the covert art of the poster for the film. I have always found this segment to be the most epic part of the entire film. The title character was an early representation of female empowerment inside of stories that we almost always associated with strong, male characters, such as the title character in the sequences titled “Den.” Critics always point to the segment being an example of what men are comfortable with in allowing their heroines to look a certain way, and remain mute throughout the segment as not to diminish the idealization horny guys feel about her. To be honest, so what. She is a badass, beautiful woman in animated form that manages to save the entire universe from the forces of darkness. I would say that’s the most important take away from the segment. With that in mind, there are copious, gratuitous amounts of female nudity throughout this movie; I do sometimes wonder if it would be revered as much as it is if it featured just as much male nudity…

Heavy Metal was the inspiration for Netflix’s reboot turned reimagining of Love, Death, and Robots, as well as the recent The Spine of Night (2021). It truly is a wide mixture of things that make this movie the endearing cult classic it is to this day. It is exciting, unique, subversive, dangerous, wickedly funny, and incredibly sexy. The soundtrack is undeniably a classic, and it does make sense that this would prevent the film from being released on home video for 15 years–the sheer amount of musical artist royalties here was likely insane. The film holds up well to its fans, in many ways, that is all it needs to do. Heavy Metal is a cult classic for us because it tells us its okay to let the weirdness in.