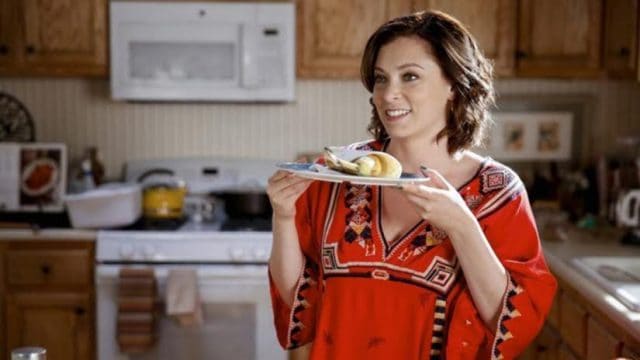 Looks like we’re back to Rebecca in love with Josh and Paula in domestic misery in the first episode of two airing post-holiday hiatus for Crazy Ex-Girlfriend entitled “Who is Josh’s Soup Fairy?”

It’s the morning rush at Paula’s house and she’s clearly trying to make it up to Scott after missing his performance last episode. He’s not having it though, but not because he’s mad. He feels guilty because he actually slept with that lady co-worker. Wow. I did not see that coming, or at least so quickly. Paula seems to react pretty mildly to the revelation and declares she has to go to work. When Scott asks to talk about it when they get home, she icily says, “What home? You don’t live here anymore.” This was well deserved but I was still shocked by the coldness.

She’s clearly not okay though because she has a breakdown at work triggered by Steve Newlin from True Blood not refilling the ice cube trays. Mrs. H and Rebecca comfort her in the conference room. Rebecca thinks it’s about their fight and offers to forgive Paula when Mrs. H explodes (and also speaks for the first time ever in the series. She chastises Rebecca for being so narcissistic and Paula tells Rebecca what happened with Scott.

Paula tearfully says her father was right in telling her that if she tried to make something of herself, men wouldn’t love her. First of all, her Dad sounds like a huge douche and I’m expecting we’ll meet him at some point this season. Second of all, it makes me so sad how her Dad was kind of right in this situation. Scott did cheat almost immediately as Paula started getting busy with school.

Josh takes Anna to the doughnut place for her first visit to the San Gabriel valley (not the Inland Empire as she thought. Josh has the sniffles, but he hopes won’t interfere with his part in promoted party at Spiders’. He invites Anna, but she can’t come because of the Teen Sports Awards. She also refuses a kiss since Josh is sick. This seems like a reasonable thing to me, but here it’s clearly meant to indicate lack of empathy.

It’s another morning rush at Paula’s but she’s struggling even more now that Scott is gone. Tommy informs her he needs a volcano for a school project and that Brendan has run away…again. That’s when Rebecca shows up with a sincere apology and offering to take care of Tommy so Paula can go on a class field trip to the state supreme court.

When Paula leaves, Rebecca is super confident in her motherly skills breaking into the first song of the episode, “So Maternal.” The video seems to emulate “Uptown Funk” complete with Rebecca in a bouffant, oversize blazer and shiny pants to emulate Bruno Mars. Twelve hours later though, the house is a mess and Rebecca looks exhausted.

The next morning Rebecca, still not understanding Tommy’s age and appropriate activities, decides to just go get popcorn and watch TV all day. Knowing Rebecca this actually seems like the smartest move, but lo and behold she runs into Josh at the store. After sending Tommy away to buy candy with several hundred dollars, she tells Josh she wants to be friends and congratulates him on his new girlfriend. When she goes to give him a hug goodbye, he informs her he’s sick. Rebecca hugs him anyway and you can practically see “I heart Josh Chan” light up in her eyes. When Josh then tells Tommy he has the best babysitter, Rebecca is clearly smitten again.

She decides to send him chicken soup with a note of caring friendship. The problem is the soup smears the note, so Josh assumes it’s from Anna. When Rebecca sees that Josh tagged Anna in his non-selfie selfie with the soup, she declares she has to go correct him. She sees he’s at Spiders’ and so naturally she decides to get Tommy a fake ID and take him with her to the club.

Rebecca shows up at the club in her mom outfit and quickly finds Josh but sees Anna (who showed up to surprise Josh) too. She gives Tommy the background and explains that Anna must not see her. She ducks under some people to avoid detection, but loses Tommy in the process. Through Instagram she and Heather, who’s there promoting Miss Douche, figure out he’s in the bathroom, but he’s gone by the time they get there. They’re then forced to hide out in the bathroom when Josh and Anna burst into the bathroom to have sex.

Anna chats with Hector and WJ, condescendingly complimenting the club (and its big parking lot) as they wonder what Josh’s big surprise is. He had said it could be a big career move, so Anna wonders if he’s become a party promoter. The DJ then announces a runway show for a local store with models scouted from local businesses. WJ and Hector realize immediately what’s about to happen. To their credit, they try to steer Anna away. She wants to laugh at the trainwreck. That is until she sees Josh strut down the runway in a zippered outfit, which he then strips the pants and shirt sleeves off of before leaving the runway.

Rebecca and Heather have no luck finding Tommy and suspect he left the club. Rebecca censures herself for being selfish again, but when she looks at Heather for an objection of this statement, Heather refuses. Props again to Heather for always being straight with Rebecca.

Josh tells WJ he was so wrong about Anna and that the soup really made him think she was right for him. He wants somebody warm and nourishing like that. Hector appears and reveals that Rebecca’s the one who sent the soup. Josh realizes how much Rebecca cares about him and declares that she’s perfect. WJ and Hector point out her issues, but Josh doesn’t listen. Instead he sings, “Duh,” a song about how obvious it always was that Rebecca was the one for him.

Rebecca is practicing her speech to tell Paula she lost Tommy when she walks into the house to find Paula back early from her trip. Tommy quickly pops in the kitchen to Rebecca’s relief. They lie to Paula about working on his school volcano and a bully destroying it. Paula tells Rebecca she came back because she felt bad being away and that she missed Tommy. There’s a knock on the door and it’s Josh there to declare his feelings. (How did he know she was at Paula’s?) Paula tries to give them privacy and gives Rebecca the go-ahead to leave with Josh, but Rebecca does the right thing for once and tells Josh she needs to be there for her family right now. He leaves a little disappointed but says he won’t give up on her.

After Josh leaves, Rebecca comes clean to Paula about the club and losing Tommy. After Paula confirms that nothing serious actually happened to Tommy, she laughs. She reveals it’s no big deal. She lost him in a Barnes and Noble for a WEEKEND once. They then declare their love for each other, Paula impressed that Rebecca chose her over Josh, and hug, their friendship officially mended.

I’m curious what effect the Josh and Rebecca situation is going to do to her friendship with Valencia. What did you think? Sound off in the comments below! 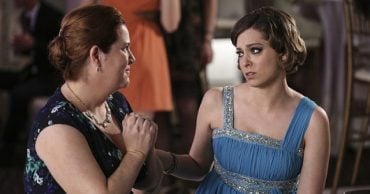 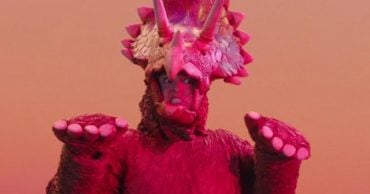 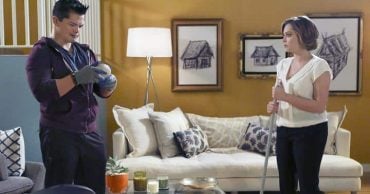 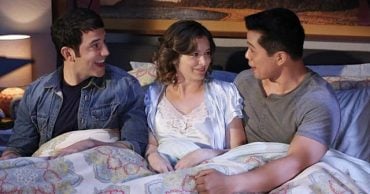 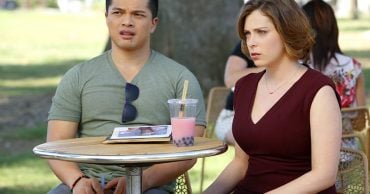 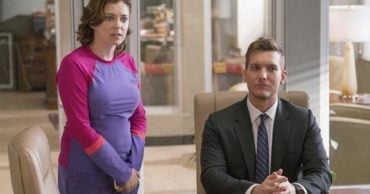