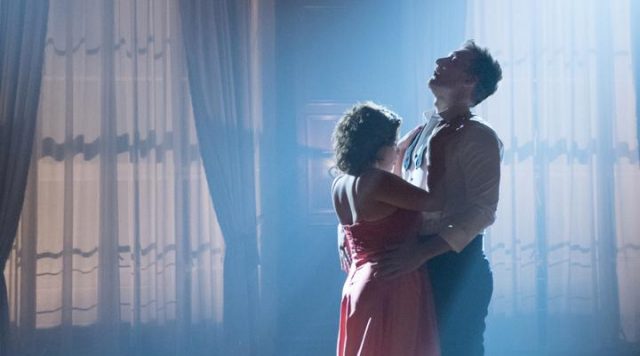 Rebecca Bunch finally locked down the man of her dreams, but her attraction to Nathaniel (and a little wind) start to cause some problems in the latest episode of Crazy Ex-Girlfriend, “Josh Is the Man of My Dreams, Right?” Dr. Akopian may still be upset about Rebecca’s close call with emotional maturity, but Rebecca has quickly forgotten her doubts. She now proudly displays her ring to her co-workers, and defends her quick engagement. Nathaniel arrives for the meeting and offers his condolences to Rebecca. Unsurprisingly he’s the kind of guy who believes the fun is in the chase and thus rejects the idea of marriage.

Rebecca lies to Paula about Josh giving her Goosebumps as they talk over coffee, but encourages Paula to call Scott. Phew, I was worried Scott was gone for good. When Rebecca leaves, Darryl tries to offer his well-meaning but terrible counsel.

Back at the house, Rebecca shows Josh a dream wedding venue but they are disappointed to see no openings for two years. They decide to put their names on the list and just have a long engagement. They start to make out, but Rebecca notices the lack of Goosebumps. Josh sees Rebecca’s not feeling it, but he assumes it’s because of the incoming Santa Ana winds. Apparently they’re called “devil winds” and cause strange things to happen. (So basically it’s like a full moon.) That leads to the first song of the episode, but strangely it is not sung by anyone we know. Called “Devil Winds,” the singer is supposed to be a personification of the winds and de facto narrator for the episode, who just happens to look and sing like he’s straight out of Jersey Boys.

In the midst of the winds, a window blows open in the conference room during a meeting. When Rebecca goes to shut it, her shirt flies open and they all see her bra. Nathaniel looks especially impressed and Rebecca seems disturbed that his look gives her Goosebumps. Personally, I would blame that on the wind if I were her. During the night Santa Ana guy blows some magical dust into the air causing Rebecca to have a sex dream about Nathaniel. It turns out Nathaniel dreamed the same thing, although he reacts a little more repulsed.

The next morning Karen, Paula and George (though people still can’t remember his name) talk about their weird dreams in the kitchen. Paula tells Karen in her dream she walked through a funeral home and saw Darryl in a coffin holding an oil painting of the two of them.

Paula decides the dream means she should be nicer to Darryl so she offers to sit for an oil painting, ha, but ends up agreeing to go to dinner with him. Rebecca confides in Paula about her dream. Paula assures Rebecca it’s fine but she should just avoid Nathaniel to be safe. This prompts Rebecca to literally duck whenever she sees him coming. She stays late to avoid him, but then, of course, they both wind up on the elevator, which then breaks down (because of the wind of course).

Paula and Darryl have dinner at an expensive restaurant and he again encourages Paula to call Scott since she does miss him. Unfortunately, Darryl takes her appreciation of the advice and dinner to mean he should call Scott over to the restaurant. When Scott shows up Paula’s pissed and storms off.

Rebecca screams for help in the elevator and lucky for them, George is there and hears them. When George agrees to help them only if they can remember his name, they realize they’re not getting out any time soon. Nathaniel, very casually and bluntly, suggests he and Rebecca have sex while they’re stuck.

It’s Scott Michael Foster’s first song everyone, “Let’s Have Intercourse”! Let me tell you that is a weird song to have stuck in your head. I feel like they should do a mash-up with “We Should Definitely Not Have Sex Right Now.” The music video looks like an imitation of Dirty Dancing, but Nathaniel just insults Rebecca. He insists they have sex so he can get her out of his system. I wonder if the writers thought of Pride and Prejudice at all when they came up with Nathaniel because he reminds me a lot of Mr. Darcy (in the first half of the book at least).

Rebecca turns down his offer and says they should get to know each other platonically. They bond over Harry Potter. When Rebecca brings up Nathaniel’s proposition as proof of why he’s a Slytherin, he moves in closer and asks if she doesn’t miss the chase. They’re about to kiss when the elevator starts back up. Rebecca jumps up and looks ahead, but then she stops the elevator herself and kisses Nathaniel anyway. She runs off toward her car, but has a (mental) run-in with the Santa Ana narrator guy. Next think you know she runs into the bedroom and wakes up Josh to tell him something.

Turns out she’s not telling him about the kiss, but instead that she booked that wedding venue…in two weeks. She did so in class Rebecca fashion by stalking a bride on Instagram and offering to pay her to move her date. Rebecca doesn’t tell Josh this. She lies and says the venue called her with the opening. Josh is a little apprehensive, but she promises she’ll do all the planning. They then realize the “devil winds” have left.

When Rebecca tells Paula about the wedding date she still leaves out the detail that she got the bride to move her date, insisting it’s fate. Again she encourages Paula to call Scott. So wen Scott drops off the kids later, Paula asks him to stay for dinner and, you know, move back in. Later she goes into Darryl’s office to apologize and tell him about her reconciliation with Scott. He says he’s fine with not being her best friend but she’s still his. He breaks out a ukulele and sings “You’re My Best Friend (and I Know I’m Not Yours).” Paula does give him something by telling him he’s her best male friends, thrilling Darryl.

Rebecca tells Nathaniel about the upcoming wedding. Nathaniel reacts nonchalantly and mocks her for marrying a “muggle,” but he does look mighty sad when she walks away. When George comes up to Nathaniel, who finally knows his name, apologizes for his behavior. Nathaniel acts like he’s fine with it, but then re-fires George, for good this time. George seems to care more that someone finally remembered his name. Poor Glenn :).

In the latest episode of Crazy Ex-Girlfriend, the Santa Ana winds bring Paula and Darryl closer together while stirring up sexual tension for Rebecca and Nathaniel.