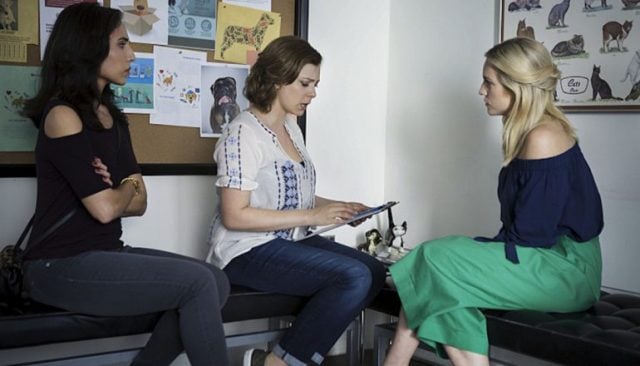 It’s a post-BFF world for Rebecca and Paula in the latest episode of Crazy Ex-Girlfriend, “Who’s the Cool Girl Josh is Dating?”

It looks like paralegal Paula needs to get out of the way for lawyer Paula. Paula redecorates her desk (or does a “rebrand” as she calls it) and gets rid of tchotchkes in favor of law books and Lady Justice. Rebecca walks by multiple times for he sole purpose of giving Paula the silent treatment. Later at the copy machine though, she confronts Paula and demands an apology. Paula acknowledges their problems but needs to stay focused for a big upcoming paper. She also admits she doesn’t know how to fix things.

At the Proctor household, Scott expresses his excitement about performing with his barbershop quartet at an upcoming office party. Paula on the other hand is enthralled by a constitutional law case from the 1890’s. When Scott suggests she make up with Rebecca, she scoffs at the idea with some middle school ‘tude.

Josh meets Anna at a trendy coffee shop in Silver Lake. Josh looks overwhelmed by the number of options for regular coffee and baffled by most of what Anna’s saying. She largely talks about eyebrows (she’s a tweezer to the stars) and makes a joke with the mustached barista about Frieda Kahlo’s unibrow.

Heather, Valencia and Rebecca hang out at Rebecca and Heather’s place. And by hang out I mean they sit around the kitchen table staring at their laptops. Rebecca and Valencia comment on how great it is to not follow Josh any more, but then both immediately look him up. They each try to pretend they’re not digging but are shocked to find Josh has a girlfriend. When they both exclaim out loud in reference to the girlfriend, they team up to dig up on Anna. Heather warns them not to go down the rabbit hole but obviously they don’t listen. This is shown through Brittany Snow’s CXGF song debut, “Research Me Obsessively.”

Not understanding what someone as hip and successful as Anna sees in Josh, they go to her salon to do some recon. From eavesdropping on her phone conversation and seeing exiting customers with packets of white powder, they assume she must be a drug dealer. They go back to the car and decide to tell Josh about the “drugs,” but when Rebecca starts to drive she runs over something. Wouldn’t you know it, she ran over Anna’s beloved cat, Gravy.

Rebecca and Valencia panic and claim a man dressed like Jack Sparrow hit and ran. Rebecca offers to take them to the animal hospital. Having given Anna fake names, they go about finding out as much about her as possible. They discover that Anna is older than she looks (29) and that she doesn’t weigh herself. Valencia’s not buying the weight thing as she’s still having some body dysmorphia issues. The vet comes out with the collar Josh bought for Gravy and assures them the cat will be fine.

Rebecca uses the collar to segue into talking about Josh. Anna’s language still insinuates she’s a drug dealer but I’m guessing that’s a red herring. Josh has been describing his relationships with Rebecca and Valencia as toxic, which upsets them. Anna insists Josh will find the person who ran over the cat and make them pay. How, they ask. Anna’s salon has security cameras. Ruh roh.

Hoping to find and erase the security footage, Rebecca and Valencia break into Anna’s salon. Valencia stole Anna’s keys and figures out that the alarm passcode is Anna’s goal weight of 113 (from 115). I’m curious to see if Valencia’s body issues will become a bigger issue later on in the season.

Scott anxiously waits for Paula at his office party, but his friendly lady co-worker is the one there to support him. Paula hangs out with Sunil until she remembers Scott’s party with a jolt. Scott looks crushed when Paula only shows up at the end of his quartet’s last song.

After Rebecca successfully finds and deletes the security footage of her running over Anna’s cat, they look for proof of Anna’s drug dealing. They quickly figure out, however, that the white powder is just a paste for eyebrows growth. When they see footage of Josh delivering flowers to Anna, Rebecca uses her lip-reading skills to find out what he says. He tells Anna he’s never felt this way about anyone before. This devastates both Valencia and Rebecca. They drown their sorrows at Homebase for a little bit, Valencia decides it’s time to get over Josh and she needs to get laid. So she leaves Rebecca to go hit on a very average-looking guy.

Paula and Scott fight about Paula missing the show at his company’s warehouse and then at home. Scott says he feels left out and rejects Paula’s multiple apologies. She tries to call Sunil to talk it out but he’s busy with his kids.

Feeling alone and missing each other, Paula and Rebecca sing to the rain. They simultaneously but separately belt out “You Go First,” an eighties-themed ballad, complete with big hair mullet wigs. The both express their desire to apologize, but just don’t want to do it first.

At the end there’s a brief scene where Anna plucks out one hair on a client and charges her $300 for it.

Side notes of the week:

What did you think? Sound off in the comments below!

In the 12/9 episode of Crazy Ex-Girlfriend, Rebecca and Valencia cross enemy lines trying to learn about Josh’s new girlfriend, while Paula and Scott’s marriage is starting to suffer from Paula’s school.