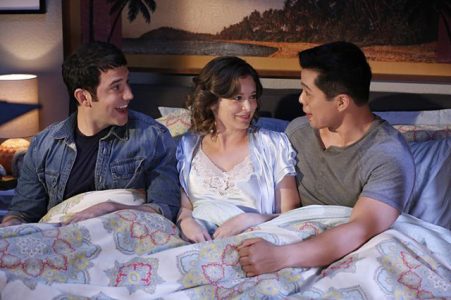 Based off the end of last week’s episode of Crazy Ex-Girlfriend, the promos for this week and, of course, the episode title (All Signs Point to Josh… or Is It Josh’s Friend?), this episode was clearly going to be about Greg, Josh and Rebecca’s situation.

The episode opens with Rebecca’s fantasy where she doesn’t have to choose between Josh and Greg. Personally, I do not love how she refers to him as a “viable alternative” to Josh. He’s your real soul mate woman. Get on board! Turns out she’s asking a throuple (3 people in a polyamorous relationship) if that’s what polyamory is like. They’re annoyed because she made up false pretenses to meet them and that she’s interested in polyamory only because she can’t choose between two guys. They help her figure out she’s in a love triangle.

This leads to the only full song of the night (woah!) in which Rebecca does an amazing Marilyn Monroe impression. “Love Triangles” spoofs Monroe’s “Diamonds Are a Girl’s Best Friend” number. A large (gay) male chorus tries to teach her about actual geometry, but she’s only interested in the “math” of love triangles. The “real life” version of this is a conversation with her therapist, but she’s still using the Marilyn baby voice.

Dr. Akopian points out neither man has actually asked for a relationship with Rebecca and that she should not be in a relationship at all right now. Rebecca promptly ignores all of this and says she’s going to let destiny decide. Conflicting signs plague her until an office lunch with Paula. Their shared menstruation app and a bad reaction to egg salad make her think she’s pregnant. Obviously this is a sign that she should be with Josh. Who needs a pregnancy test when you just know? Go ahead and buy those pre-natal vitamins Rebecca! Meanwhile Greg finds out his Dad sold their house and wants Greg to take half the money to finally go to Emory. Greg worries about how a big move like that would affect his recovery.

Rebecca begs Josh to come over and just as they’re about to get busy, he sees the vitamins. She gives her goes into her spiel about how it’s a sign, what the name should be, etc. etc. Josh looks catatonic for several minutes while Rebecca takes a pee break. Surprise, surprise her period arrived after all. She immediately moves on to “Period Sex” (the partial song of the night), but Josh decides this is the wake-up call he needed and ends things, supposedly.

The next day Rebecca plops down, despondent, at Paula’s desk. She reacts surprisingly rationally to Paula’s advice to be alone and spend some time on her self. When Rebecca goes off for a walk and makes an off-hand comment about their synced periods, Paula realizes she still hasn’t gotten hers. It wouldn’t be a period-heavy show (get it? :)) without a few pregnancy scares. She calls Scott but refuses to take the test because it will put off realizing that she can’t fulfill her dream after all.

Greg and Rebecca wind up on a scenic bridge together. Coincidence or destiny? They don’t know. They have a great, mature moment and Rebecca starts to walk away when Greg pulls her into a kiss. And…she’s back at Dr. Akopian’s office. Now she’s convinced it’s obviously Greg she was supposed to be with all along. On the bridge, she asks Greg to meet on the bridge at sunset the next day and they’ll do a relationship slow and the right way. I wish I could believe her!

Greg packs up the house with his Dad who is mad that Greg is staying. He points out that it’s really because of Rebecca even though they’re poison for each other.

Paula continues to contemplate the pregnancy test at her desk when Darryl comes up with congratulations balloons. No, Darryl didn’t eavesdrop again and get her congratulations balloons for the pregnancy. He got her into law school, like immediately. AND he put together a surprise party. AND he got her Nine West pumps just like the Working Girl ones she had dreamed about. Tangent: can Darryl and White Josh get a spinoff show? I don’t want them to leave the group, but I just want to bask in the gloriousness of their adorable relationship more.

Rebecca waits excitedly at the bridge when Greg shows up smiling. Before she can see him though he sees a DANGER sign. Guess he decides that’s a bad sign because next thing you know, Rebecca’s at home with a bottle of wine. After passing out on the couch, she wakes up sad, angry and confused. Just as she’s about to text Greg she gets a shocking Snapchat alert. Greg’s headed to Atlanta to go to Emory, like immediately.

Greg says goodbye to his boys (Hector, Josh, White Josh, and wise tween Chris) as Rebecca races to the airport. The adult males are confused and sad about the abrupt departure, but they each say farewell, one by one. Last but not least, Josh tears up as they have a moment and say their goodbyes. Damn you Josh Chan. Why do you have to go and make me like you again? Rebecca shows up just in time to ask him what happened and where the hell he is going?

At Paula’s house she and Scott sit at the table as she stares at the, wait for it…POSITIVE pregnancy test. What are you doing to me CXGF?! It’s only the third episode. I can’t handle all these emotions so soon.

Not sure about you, but so many of my favorite moments on this show are the random, little ones. Rather than getting on a tangent above, I’ve included some of my observations and questions below.

All Signs Point to Josh… or Is It Josh’s Friend

In the 11/4 episode of Crazy Ex-Girlfriend, Rebecca tries to solve her imaginary love triangle problem and Paula gets a couple surprises.