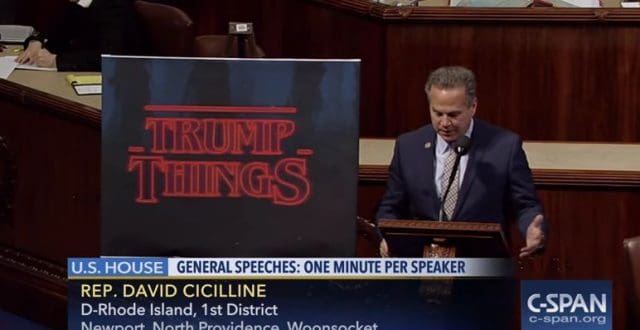 I never thought I’d live in a world where a congressman actually used the Netflix show “Stranger Things” in a real presentation he did about Donald Trump.  This is the world we live in folks.  This is a real video.  It’s not “fake news.”   This was literally on C-SPAN today.  Rep David Cicilline (D-RI) delivers a speech on the floor of the House of Representatives referring to Stranger Things and you have to think that the world is kind of ending right?

I suppose I can understand using pop culture as way to prove your point but this isn’t high school.  This isn’t college.  I mean this is the kind of thing you’d do if you were making a National History Day video in middle school.  It’s unfortunate too because I, like many of you, love Stranger Things and now I have to associate this video with that show?  Unacceptable.

Like I said, I guess the attempt was OK but the execution was beyond awful.  How do some people in politics make a living?  I don’t get it.   Sure maybe this is how you reach Trump fans but I’m pretty sure this guy doesn’t even watch Stranger Things.

Check out the video below