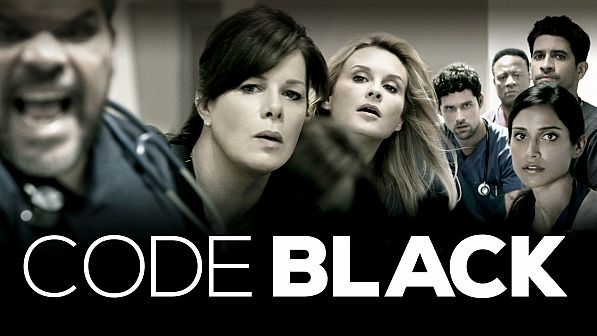 Have you been anxiously waiting for Code Black “Diagnosis of Exclusion” because its part two of last week’s intense cliffhanger! Â Oh. My. God! Â I’m sure we’re all wondering ifÂ Gina Perello (Christina Vidal)Â — the acting head of the E.R – is gonna make it! Â Do you think that lunatic Gordon (Jesse Bradford) will go after resident doctorÂ Malaya Pineda (Melanie Chandra)? Â She seems to be the one he was fixated on. Â On the other hand, she didn’t annoy him the way Gina did…. Â As forÂ Dr. Leanne Rorish (Marcia Gay Harden)Â and her plan to leave Angel Memorial Hospital, I suspect this will change her mind. Â There’s no way she’ll abandon her students after a trauma like this, right? Â Finally, is it bad that I’m looking forward to how Dr. Neal Hudson (Raza Jaffrey) will comfort resident doctorÂ Christa Lorenson (Bonnie Somerville)Â when this is all over? Â  Christeal forever!

At that point I didn’t know about Malaya? Oh no!

I really like the way they are telling these stories! Â The stalking of Malaya was scary because it felt so realistic. Â As a woman, I totally know that feeling, that moment when you know something is off. Â It’s never been that off for me, but I felt her process from concerned and creeped-out to real terror. Â The fact that he didn’t believe she was a lesbian is a whole other discussion.

Mama: “Nobody brought her in, she made it on her own.”

This surgery on Gina is crazy! Â Time of death 5:53 am…. Â Everyone is wrecked.

It’s not just that Gina died. Â If she’d had a heart attack it would be sad, but the team wouldn’t have been so completely devastated. Â Murder is a different kind of trauma. Â It’s unfair, unexpected…

Leanne is going to have to do Gina’s job? Â That sounds like karma. Â Leanne hated everything Gina had to do. Â I’m hating how everyone is looking for someone to blame.

Mike says they did everything they could for Gina – and she deserved it.
Gina and Christa talked about Â the thing with Neal before….well, that’s one way to disclose a relationship.

Malaya is so brave! Â Her willingness to retell that story again. Â And Dr. Angus LeightonÂ (Harry Ford) is a hero! Â I hope they don’t find a way to blame him for this. Â This board seems to want to blame everyone to cover their butts. Â The one person responsible is Gordon! Â What’s the matter with this board?

We’re back. Â Angus is telling his story. Â Gordon pulled the knife out. Â Idiot.

Angus: Maybe I could have done more but, I was out of my mind.

Great, now Jesse is blaming himself and Malaya is blaming herself. Â Meanwhile the stupid board is still pointing fingers.

What? Â Neal balked at signing the relationship disclosure form? Â What?

Back in the boardroom Christa is being questioned about her work on Gordon. Â They’re suggesting her personal feelings about the patient having stabbed two people she knew effected her work.

Leanne: Please, this line of questioning is obscene!

Yes, Leanne, it certainly is!

The cold-hearted bureaucracy that we’re seeing in this episode is scary. Â At the same time, how many lawsuits do hospitals face a year. Â It makes think that we’re just messed up in general. Â At the end of the day, a hospital shouldn’t be blaming its doctor’s in a situation like this.

Neal tells the board about him and Christa. Â Thank goodness!

That is deep. Â Mama hopes Gordon dies. Â This doctor Will Campbell (Boris Kodjoe) is a real piece of work! Â This is a nice moment between him and Malaya.

I thought the CEO guy had something going with Gina…poor guy.

Oh. My. God. Â Angus let Gordon bleed out! Â No wonder he said he was out of his mind! Â Do you know that show, “What Would You Do?” Â  That was one hell of a situation!

That’s a wrap! Â We’ve got a ton of things to contemplate. Â Does what Angus did make him a killer or just human? The idea of Leanne having to be the hospital administrator is crazy, but at least she’s not leaving. Â She and Dr. Ed Harbert (Jeff Hephner) now have an odd kind of bond. Â I wonder if that’s going to make the upcoming weeks of working together easier? Â Let’s hear in the comments what you thought of Code Black,Â Â “Diagnosis of Exclusion”! Â Also, you can check back this week for an in depth look at the episode via theÂ Code BlackÂ “Diagnosis of Exclusion” review. Â See you next week!

Five Terrible Movies Involving The Cast Of Don’t Look Up

Why Don Jon Is An Underrated Gem

Is The Conjuring: The Devil Made Me Do It The Worst Film In The Series?
Comics Lists News Things You Didn't Know Whatever Happened To