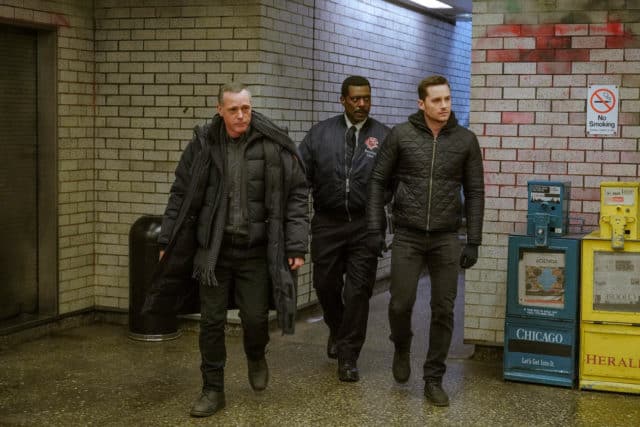 Leaving right where Chicago P.D.‘s 100th episode left off, Chicago Fire picked up the latter hour of the latest ‘OneChicago’ Crossover. P.D. was able to identify who their serial bomber was, as well as his motive, but they needed help to draw him out into the open. That is where Firehouse 51 comes in. Antonio and Voight ask Brett and Dawson to help plan a bug on one of their suspect’s contacts, but they’re not the only ones who step into the lion’s den.

From the get-go, Boden and Casey are not comfortable with how tenuous and short-notice this plan is. Cruz has an even bigger beef with the whole thing, given how well working with Intelligence went for his brother years ago. For the 10 minutes Brett and Dawson are in the lion’s den, everyone holds their breath. The fact that the women didn’t get caught was a miracle.

Despite Dawson and Brett’s operation, the explosions don’t stop. Within the hour, a woman’s car is blown up with her inside it. She ends up being the mother-in-law of Intelligence’s suspect, Shepherd. Since the police department doesn’t have any leads, Fire comes at it from a different angle. Attacks like this don’t happen in a vacuum, and you don’t just wake up one morning and use C-4. So Boden and Severide go back a few months to see if they can find records of Shepherd’s practice runs with the materials. They hit paydirt, but no Shepherd, yet.

While Intelligence sits on his lair, the rest of Fire must deal with real talk about their relationships. Nothing says serious times like a serial bomber. In times like these, you get perspective on what relationships are real, and which ones are worth letting go. No matter how much Cruz cares about Brett, the connection just isn’t there on her end. That doesn’t make his heartfelt acknowledgement of his love for their friendship any less beautiful. But no matter how on-and-off they are, Brett and Antonio can’t get each other out of their systems. Neither can Severide and Stella, who just might make it across the finish line this time given her breakup with Zach. And this time it feels right. There’s no excess baggage weighing either one of them down, and a relationship would come organically from the strength of their friendship. There is something to be said for timing.

Chicago Fire is able to take down Shepherd before he has the chance to blow up his last victim. And we mean literally right before. As in, the man was strapped with his finger on the trigger. So much of the hour was a lot of stopping to randomly hold your breath that it was nice to have one big, good conclusion.

All in all, the hour felt a little flat in terms of the investigation, compared to the compelling story it started out as on Chicago P.D. Thoughts?