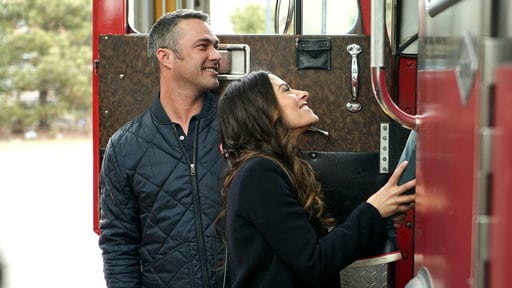 There is no good outcome when you reunite with an ex, especially one you were serious with. But Chicago Fire brought back the ex to rival an exes anyways. Sarah Shahi made her return as Severide’s ex-girlfriend Renee this week. Her intentions seem harmless at first, but inevitably, things get complicated. Remember, this is the girl who Severide almost married. The playboy firefighter has had alot of relationships, but this one marked in his top serious list. How did that bode for his current relationship? We don’t actually know yet.

Renee’s visit doesn’t start out shady, but the minute she walks in, everyone pays attention. Cap’s exact words: “This day is about to get interesting.” Renee actually returns to Chicago to work a pro bono case for her law firm on behalf of two injured firefighters. She needs Severide’s help to make the case against the oil refinery whose negligence led to the injuries. There is no way Severide would turn down an opportunity to help a firefighter, but Renee complicates things. Not to mention her son, the one Severide almost raised as his own. Who can tell Renee’s intentions, but one thing is for sure. She will be the real test for Severide and Stella’s relationship.

Severide wasn’t the only dealing with an ex this week. Ugh, why Cruz? Why would you demean yourself by sleeping with your married ex? No amount of heartache over Brett is worth disrespecting himself. Brett’s disappointment, not to mention a good punch from the jealous husband, should be enough proof that this slip in good judgment should be a one time deal.

There could be a big change coming to Chicago Fire. With the Commissioner leaving to take a job with FEMA, there’s an opening in the ranks that needs to be filled. It can be filled by a pencil-pusher who’s never worn the gear a day in his life, or it could be filled by a smoke-eater. It would be nice if things never changed, but that wish never comes true. The best thing for the department would be for Boden to take over as Commissioner. He has on-the-ground experience, and he has taken down more than his fair share of corrupt officials. Though he’s upset at first, Boden realizes Casey and Severide talk him up for the job because they care. And when they lose a fellow firefighter, it’s apparent the department needs a leader who knows how to really be there for his men. But Grissom realizes this at the same time that Boden does. Grissom just doesn’t know Severide has been talking Boden up to everyone in the chain of command.

There will be two fights in Firehouse 51 before the end of Season 6. It’s Stella vs. Renee and Grissom vs. Boden. Who will come out the victors?

The woman who turned Severide’s life upside down in Season 1 returns to Chicago Fire, but she’s not the only person gearing up for a fight in the house.