Home
Movies
Check Out This Retro Grindhouse Trailer for Godzilla vs. Kong 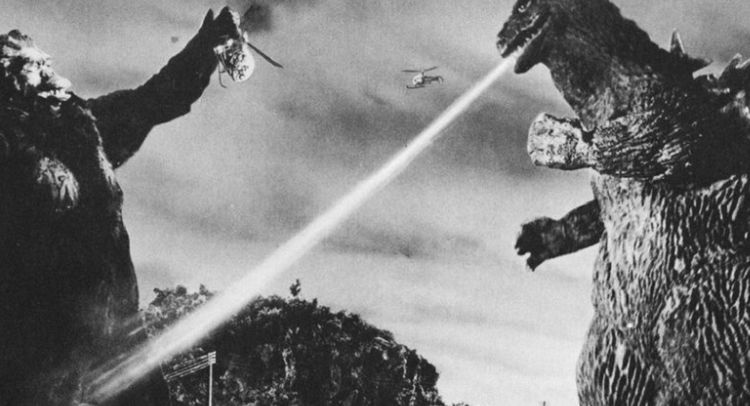 For so long people have been waiting for a rematch between two of the greatest movie monsters that have ever been created, and the retro Grindhouse trailer below is something that kind of captures the whole feel of the movie in a way that people would easily remember from a few decades ago since it paints a healthy picture of what the movie is pretty much about. Everything else was just details since people were flooding the HBO Max streaming site at midnight on the 30th of March to see the outcome of Godzilla vs. Kong to see once and for all the result, who would be victorious, the enormous lizard with the atomic breath, or the massive ape that, thanks to CGI, now had a greater deal of mobility and could easily evade most of Godzilla’s attacks? Well, it takes a lot of owning up to the facts as a Kong fan, but Godzilla was pretty dominant right up until Mechagodzilla showed up and started picking him apart. It wasn’t until we were nearly a month or two away from the big showdown that the big metal construct was even confirmed, but many people had already guessed that the man-made creature would be showing up since there were hints of it in the trailer. But between Kong and Godzilla, it was obvious that Kong needed a bit of help since being sequestered on Skull Island for so long didn’t help when it came to dealing with Godzilla, who’d been in the wilds and taking on titans for so long.

There were retro moments to the movie since Godzilla was going absolutely nuts trying to find the source of the disturbance that was causing him to tear apart cities in order to discover what Apex was hiding. The downside of this was that no one else knew what was going on since it appeared that the lizard that had been their hero a while back had now turned on them and perhaps confirmed that his mission in life was to rid the world of humanity to create a new balance. Only when Kong reappeared did he pick a new target and go after the ape, which proved to be a harder battle than Godzilla might have anticipated, especially since despite the uphill battle, Kong didn’t bow down like the other titans, and was adamant about taking the fight to Godzilla. Among the titans, these two have always been seen as the alphas, no matter that many of the creatures that Godzilla has taken on would probably wipe the floor with Kong. But against Mechagodzilla, the big lizard needed a pretty big amount of help since after his fight with Kong, Godzilla was nearly wiped out, no matter what anyone wants to say. Kong didn’t make things easy, and he even walloped Godzilla for a hefty amount of damage with the ax he found in the hollow earth.

One could say that Kong could have finished Godzilla, and in turn, the big lizard could have finished Kong, but that’s not what happened. The fact is that Kong was just about dead when his heart was jump-started by the vehicle that exploded on his chest, the effect jump-starting his heart as he rose, set a dislocated shoulder, and ran back into battle after the young girl he communicated with let him know what was going on. As a lot of people expected, Kong and Godzilla shared a common enemy despite being at odds with each other. The look that Godzilla gave to the ax before heading off after the confrontation was hard to miss since it indicated that the battle between Godzilla and Kong was in fact something that was part of an ancestral war that the big lizard might have understood a little better than Kong. But when all was said and done, the two let each other go their own way at the end of the movie, and while Godzilla remained on the surface, or beneath the sea, Kong was content to head back to hollow earth where he felt more at home, which begs the question of whether we’ll see another movie in the years to come or not. The Monsterverse is still wide open, and it’s fair to say that Kong and Godzilla might have more threats to take on since the destruction of Apex and Mechagodzilla doesn’t necessarily mean that everything is over and done with since there’s still the question of whether or not other titan DNA has been discovered and whether or not it will be used to unleash more monsters in the coming years.

This was definitely a bright spot in the Monsterverse that was needed, and now it feels that it needs to be built up in a way that will see things go even further.