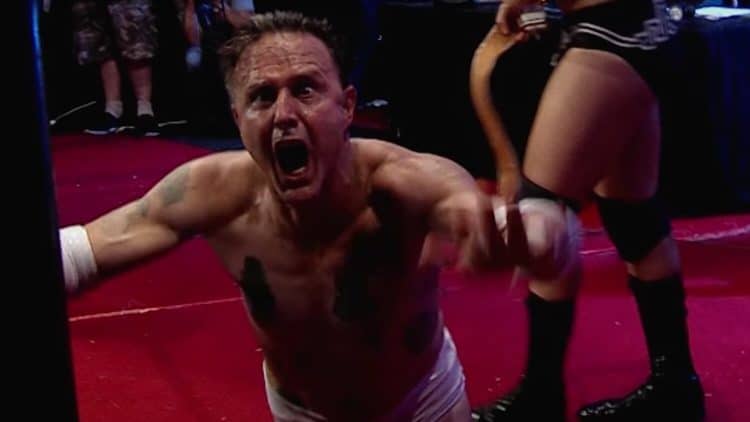 So you can’t kill David Arquette. Can you cripple him? That appears to be the goal in this documentary since to be fully honest, David Arquette’s career might have been okay for a long time had he not messed around with the WCW for any longer than it took to make the movie Ready To Rumble. Let’s be honest here, the movie was goofy, kind of stupid, but it was also just bad enough to be good since it featured several actual wrestlers, Martin Landau, Oliver Platt, Scott Caan, and several other notable celebrities that made it worth watching. David Arquette was actually pretty funny in the movie as Gordie, the Jimmy King-obsessed fan that wasn’t too bright but had a lot of heart. But to be real, that’s where it should have ended. His inclusion into the world of wrestling made him an outcast when it came to Hollywood since he didn’t get a decent part after that for quite some time. One might be able to cite the idea that he was allowed to come back to the Scream movies, and that he had a few other smaller roles, and he was even the star in the ridiculous movie Eight-Legged Freaks, but apart from that a lot of his roles were smaller and didn’t really feature him in the same starring position as he’d been before this move to professional wrestling.

Seriously, even as a cruiserweight, this guy is kind of a joke when he’s in the ring since he’s the type of wrestler that jobbers could take out. If an older wrestler such as the Brooklyn Brawler was still around he could have probably taken Arquette. Hornswoggle might have even had a shot. But the point here is that after all his training, all the pain he’s had to go through to try and make it in the ring, for some reason he’s gone back and wants to prove to people that it wasn’t a fluke that he was there in the first place. Sadly this looks like it’s going to be another lesson in abject humiliation since no matter how much he trains, David is going to have to rely on the fact that wrestling is staged and that he might be selected to win some and lose some, but he’s still not on par with the guys that do this for a living. He’s a movie star, not a wrestler, and he’s in his late 40s, an age when a lot of wrestlers start to think that it might be time to start taking on different storylines so as to preserve what they have left of their body and not injure themselves with every other movie they perform. At his age, some wrestlers have already decided it’s not worth it to keep doing the job day in and night out to make a check that will only last to the next pay per view. Is Arquette nuts for going back to the ring? Yep. Are people going to accept him this time around? That’s a good question, but the answer appears to be an emphatic ‘no’ judging by the beginning of the trailer, and there are a lot of reasons why this is an accurate statement.

I’ve already said it, but I’ll say it again, he’s NOT a wrestler. He came into the ring when he was still a relatively young man, but he was a joke from the word go since he was part of a storyline that was being set up by creative. Sadly, a lot of us that have been wrestling fans for a long time know that WCW’s creative team dropped the ball more than once when it came to the storylines they came up with, and David Arquette’s was one of the worst. Thanks to the movie Ready To Rumble it was thought to be a good idea to have him featured on the show for more than a couple appearances and it was even decided that it would be wise to give him the championship belt for one reason or another. One might think that it would be a time to laugh, to admit that it was funny, and then have him drop it just as quickly to someone else, but the creative team doubled down and made it official, and so the horrid tune played on.

If he’s really wondering why his career started to tank after that, he had only himself to ask. He still received roles in Hollywood, he still had work, but his time as a wrestler should have been done and over with, since he’s not suited for it, he hasn’t been a part of the life for long enough, and no matter how ripped he gets, his body just isn’t conditioned for the damage that can be inflicted in the ring. The title should probably be changed to “You Can’t TEACH David Arquette”. It’s a little awkward, but it gets the point across.