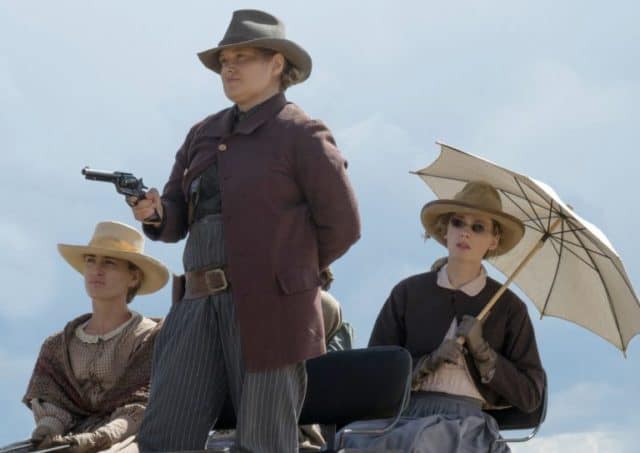 Netflix is just cranking them out lately and several of them are looking like they might be worth a watch. At the risk of offending anyone Godless seems like a movie that feminists might get a kick out of, and men might actually cringe at. So far from the trailer it kind of makes men out to be the enemy and perhaps reluctant and uncertain allies in some cases. It’s the kind of film that never would have been made decades ago but now is showing up and bringing forth some very serious attitude and ideals that are fun consider and interesting to watch onscreen. The divisive aspect of it might seem like a lightning rod to spark many a conversation about gender and how men and women differ in so many ways but quite honestly it’s better if people just watch the movie and hold their opinions until later.

Jeff Daniels and several others are going to be making an appearance, though Daniels has likely seen better days and lately has been largely seen in lesser known films and shows where he’s either a central figure or someone that’s just as important but not seen as often. In this film he definitely has the look of a man that’s going to be an enemy, which is odd since he’s usually the good guy. It seems to be a role that he’s good at even if he’s not exactly action hero material or the best leading man in the world. He’s still an affable character though so really he’s capable of doing a lot more than he’s done lately.

Women in the old west weren’t always considered that much for anything other than motherhood, being a wife, the keeper of the home and many other menial duties that kept them from rising in influence. But they were inordinately tough to be honest, as they had to be in order to survive.  Some might have cowered down and hunkered in a corner after daring to challenge an abusive husband or man, but a lot of them were born and raised a lot tougher than we’re led to believe from the histories. Now I’m not certain but I don’t know how many, or if any of them were raised to be gunslingers or even capable of firing off a rifle with any accuracy, but I get the sense that a woman still had to be tough and mean enough to stand up for herself and her family at times.

They might not have been the hardened cowpokes and town toughs that a lot of men were, but discounting women in the old west seems like it would have been a bad idea. I don’t believe that all of them were homemakers and proper ladies that couldn’t fire a rifle if their finger was on the trigger and their enemy was directly in front of them. I really think that at one point or another more than a few women in the old west had to be just as tough as the men in order to get by. Hopefully Godless doesn’t blow it too out of proportion, but it could be an interesting show.