Home
Television
Castle
Castle Season 7 Episode 7 Review: “Once Upon a Time in the West” 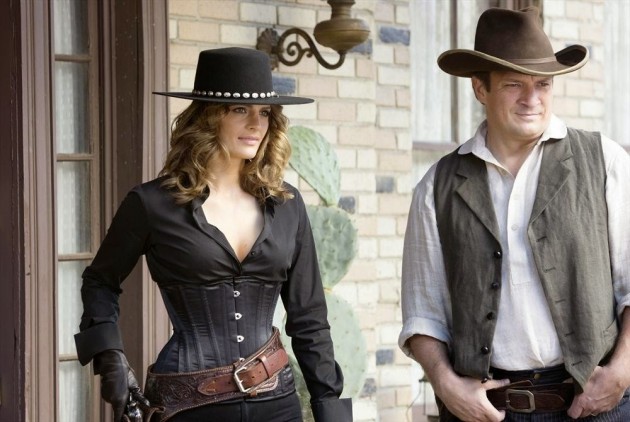 Castle and Beckett, fresh from their spur of the moment Hamptons wedding, find a way to squeeze in a honeymoon while solving a case–typical.

Ryan, Esposito, and Lanie are invited to the Castles’ (look how they’re one unit now, guys!) loft to celebrate the good news of their wedding! But Rysposplanie (I tried…) aren’t too happy with having missed out on the festivities. Lanie’s been dieting and wants desserts now! Ryan and Espo had speeches and a song–a song!–prepared for the big day. The three of them are put out that they were left out. Beckett gets a call about a murder, but the boys will meet her at the precinct, they need to sulk a little more.

Castle and Beckett head to the hospital, wondering if they will be able to get a honeymoon, as Kate used all of her vacation days to search for Castle while he was gone. Instead of “Mai Tais, we get murder.” The victim’s name was Whitney and she died arriving at the hospital, presumably she was poisoned. Her last words were “diamondback.” A little Castle speculation (snake handling fight club? Marvel character Diamondback?) is interrupted when Rysposito identify it as a dude ranch in Arizona. Whitney had booked a two week stay at the ranch, but left after three days, arriving in NY and getting sick on the train.The detectives figure she was poisoned in Arizona and search for her missing luggage.

The sheriff in Arizona wants nothing to do with the case, he doesn’t want to disrupt the lives of people he knows so closely, so he stonewalls them. But Castle has a better idea: Go undercover as newlyweds, which they really are! Gates agrees and they head out, despite Kate’s reservations and disinterest in this being their honeymoon. Once there, Castle gets right into character. They’re greeted by Gentle James Grady, the proprietor of the ranch, who allows them to stay in the victim’s room, under Kate’s request. “I see who wears the 10 gallon hat in your house.”

Once at the room and dressed for the occasion, Castle opens the bathroom door to meet their gay, naked, cowboy neighbor, who gives them the scoop on Whitney. She was hanging with a married ranch hand and came back to the room really late at night before booking it back to the city. The duo split up to look for a married ranch hand and Castle finds him in a saloon–Castle provokes him a bit and the hand drags him out of the saloon at high noon! The ranch hand tells Castle that he and Whitney never hooked up, she was after a key–whose chain was still on her when she died. They learn it was to a shed, which has explosives in it!

Whitney’s trail led to both the New York Historical Society and a Native American reservation, both giving her information on the Yavapai people, who live in that area of Arizona. Castle orders a horse and buggy (he names the horses Ryan and Esposito) and they drive out to meet with the Yavapai consultant who teases them about being dressed as cowboys rolling up to Native American land. He tells them them Whitney wanted to know the definition of a word, the meaning being either river or stream. That’s all she wanted.

Back in New York, Rysposito and Gates find Whitney’s luggage, which has a letter and a picture of a man named Clyde, who worked at the Diamond back before it was a resort. His letter says he’s close to finding a secret, relating to the Yavapai word Whitney was researching and the “Peacock Boys.” When Castle was in the saloon, he met a character looking for the Peacock Boys, who were wanted men on the search for gold. Whitney was after the gold all these years later, but her discovery of the meaning of the Yavapai word told her it was near a stream, not a river. The stream is dried up now, but Castle’s New Yorker tracking skills (he can’t track dirt or footsteps, but he can track litter!), show him and Beckett where the gold was hidden. Down in the dusty, desert cave, they find the box with the treasury stamp on it, but instead of gold inside, they find a corpse!

Somehow Beckett diagnoses blunt force trauma as the cause of death (Lanie would tsk and say she needed to get it back to the lab, or to Temperance Brennan over on FOX). The corpse is none other than Clyde, who was Whitney’s father. Whitney was searching for what killed him and she seemed to have found it. Some clues lead the team to Whitney’s sponsor back in New York, Phillip Dagmar. He admits to Ryan and Espo that he was there when Clyde died, but he didn’t kill him. He and someone else took the money and he’s felt guilty ever since. That other person was none other than Gentleman James Grady, the owner of the Diamondback Ranch! (Explains how he got the money to turn it into a resort.)

Castle and Grady end up alone in the saloon, just as Ryan is telling Castle Grady did it. Grady smashes the phone (how many phones does Castle go through in a year?) and they head into an old west showdown! But Castle fumbles for his gun as Kate walks in, taking Grady down for him. “Good thing I married the fastest gun in the east.”

Back in New York, Ryan and Esposito continue to lament that they weren’t invited to the wedding; Espo says he’s upset they weren’t considered “immediate family.” This is a great point, as a famous moment from 3.24 recalls the four of them hiding Montgomery’s shady past among “this immediate family,” so I am glad it’s mentioned and I hope the Castles make it up to Ryspo. Gates says they’re “whining like two little school girls who weren’t invited to the dance.” she tells them to be happy for Castle and Beckett, “especially after all the hell those two have been through.” In order to make up for their complaining, they each give Beckett two of their vacation days, so she has four more days to spend out west with Castle (but they’re still gonna go to a tropical island sometime next year). She puts on a corseted wedding dress and lassos Castle in for a big kiss.

This episode was so much fun and it’s great to see that the banter, the eye rolling, the magic of Castle and Beckett has remained even in what could have been an overly schmoopy, post-wedding bliss episode. But that’s not their style. This show really knows how to give character development while realizing that there are core truths to the characters that wouldn’t change, which gives the series both development and consistency; many other shows don’t know how to strike that balance. It gives me hope that now that they’re married, the show will still have somewhere to go. (But as I’ve stated before, I wouldn’t be surprised if an end game was near.) I didn’t think they could pull of this Old West honeymoon, but they wove it into the plot nicely and gave us many fun lines and moments.

– I mean, the entire cowboy Castle reminds us of Nathan’s famous Firefly role, but I’m glad they weren’t overt about it. I like the subtlety.

– “You still suck, you owe us for tuxedo rentals.” Then the back and forth of the wallet, the last pass hitting Castle directly in the forehead!

– “At least you got invited to the champagne toast.” Gates is snarky! I loved her outfit in this scene.

– Castle carrying Kate over the threshold was really sweet and fun.

– Kate’s “newlywed gossip” persona was really fun to watch her turn on.

– Kate’s wearing a very simple wedding band. It’s nice to see, as she didn’t often wear her engagement ring for work, but it’s nice she’s wearing some sort of band even while on duty.

“We approach this like writers.” “So we procrastinate and make stuff up?” Hey, I resent tha–wait, it’s true.

– Kate’s Day Two outfit was awesome, “eyes back in your socket cowboy,” as was her 4th white wedding outfit with the corset.

– I should’ve known the killer was James Grady, the actor who plays him, Keith Szarabajka, is one of those character actors you see on all the TV shows (I recognize him as a villain from the Buffy the Vampire spin-off Angel). It’s always the guy you recognize! He was also a corrupt cop in The Dark Knight.