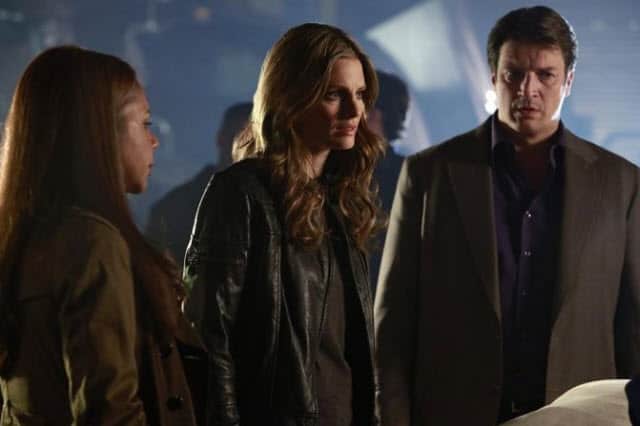 This week’s Castle is one of two episodes that has been six years in the making, (next week’s being the other). Castle must help Beckett uncover the truth of a conspiracy against her as they track down Bracken and bring closure to the Johanna Beckett case once and for all.

After an extensive “last time on,” we start with Beckett tailing Jason Marks in a dark alleyway at 1 in the morning. He gets in a car and Beckett almost follows, but she holds back and heads home. In the morning, Castle calls. He’s started his book tour, but gets to come home to prepare for the wedding in two weeks. She tells him about her surveillance work (great communication, team! What excellent character development), but he’s worried she went out alone. “I backed off. See? I was being responsible!” He wishes she wouldn’t go alone, but she doesn’t want to tell Ryan and Esposito, for fear of ruining their careers. Castle heads home and Beckett heads in to work, but the victim is Jason Marks! Beckett keeps her surveillance close to the chest, but he was shot not minutes after she headed home. Surveillance tapes put Vulcan Simmons (our return villain from this season’s “In the Belly of the Beast”) as the driver of the car Jason got into. They get Vulcan in the precinct–Gates sends Beckett home–but they can’t hold him; his lawyers say it’s not him in the photo. Beckett goes into her six weeks of surveillance archives and spots Vulcan at a handy spot to hide an unmarked car: a truck repair shop. Leaving Castle asleep in bed, she heads out.

Beckett finds the car Jason Marks was killed in, but is surprised by Vulcan himself, waiting for her in the shadows. The two taunt  each other, knowing they’re walking a thin line between life and death. He knows she won’t kill him, knows she doesn’t have a warrant. “Now all that evidence has become fruit of the poison tree. My lawyers and I thank you.” But Beckett refuses to leave until she has answers. Cut to hours later, Esposito calls Castle, looking for Beckett who hasn’t returned to bed: Vulcan Simmons is dead. I loved the tension in this moment. We know Beckett didn’t do it, both because of her character and knowing the writers wouldn’t do that to her character, and yet I still felt the tension of that scene, I still felt like, maybe I was wrong. They sewed just the right amount of doubt that made me question my convictions that Beckett didn’t do it, simply because we know how close to her this is and how long she has waited for justice.

The next morning, Castle cabs it to the murder scene and meets Beckett there. Lanie tells them Vulcan was tortured (two shots to the knees, two to the shoulders, and one final shot in the heart. The killer dug the bullets out and picked up the shell casings. Back at the precinct, Castle wants to know what the hell happened. She says she left him alive, but certainly thought about killing him. Captain Donovan from Internal Affairs arrives just as Lanie calls Beckett with chilling news: There was one bullet not pulled out and it matches Kate’s back up. This scene was terrific, Lanie’s visceral and very visible fear, the closeness with which Castle and Beckett listen to the call then jump away from each other at the news, all of it used to ramp up the tension of the scene just as Gates also discovers the news. She fights for Beckett, but Donovan goes after her anyway, only for Beckett to have fled the precinct, leaving an innocent looking Castle behind.

Ryan and Espo want in (“We’re already involved. We’re family, bro.”). Ryan says Jason Marks had a meeting with Mr. Smith, the elusive shadow man who helped Castle in season 4 and died in the season 5 premiere. He faked his death to keep Bracken’s men off of him, but he took the risk to come out of hiding to look for something.  Kate and Castle meet at their swings. Kate tries to give him an out, but he immediately disregards it. She fears for her life because now Bracken knows the file she’s been blackmailing him with doesn’t exist. They call Esposito who looks into the doctor who signed Smith’s death certificate. They track him down and though he doesn’t give them any information, Smith contacts the two and they meet in a shady parking garage. He tells them that he’s discovered the existence of a cassette tape implicating Bracken in numerous crimes. Bracken fears the tape but no one has been able to find it. Castle and Beckett book a motel room and try to come up with a plan, but after Castle leaves to get a car, Kate is ambushed by Bracken and some flunkies!

Just when I thought the taunting between Beckett and Vulcan got sharp, the scene between Beckett and Bracken is full of verbal jabs. “Everything you are, everything you’ve accomplished is because of me,” “Is that how you justify murder? It builds character? Then give me a change to build yours.” “So, I guess there’s no point asking for your vote.” He admits to admiring her fight. “But the part of me that admires you is not the part that makes tough decisions.” Kate taunts him into pulling the trigger. “I have people for that.” “I don’t want them. I want you.” “Do it now. Or don’t you have the balls? The truth is gonna come out.” “There is no truth. Not anymore.” It all seems to rash when he does exactly what you think he’ll do, he tells his guys to do it and walks out.

The lackeys dose her with a pill and liquor and attempt to make it look like a suicide. But they didn’t check to make sure she swallowed the pill, so she remains clear headed enough to fight them off the they place the gun in her hand. She receives a head injury in the fight and Castle finds her passed out in the hallway.

While unconscious, the episode delivers the biggest twist of them all, a new Montgomery scene! It was a wonderful surprise to see this new scene with Captain Montgomery, from when Kate joined the force. Stana Katic pulls off her eagerness, her youth, and her ingenuousness really well here. Montgomery asks her if she’s really looked through all her mother’s files, and while Kate says yes, she’s triggered by his mention of cassette tapes. When she wakes, she mentions not having noticed one, but wants to go back to see if she missed something. When they do head back to the apartment, Castle notices Johanna’s appointment book with secret codes–one note on the day she died D Me Family was thought to mean “dinner with family” but Castle thinks it means Detective Montgomery, evidence, family. As in she was meeting with Detective Montgomery to get the evidence and planned to bring it to Kate’s father (though if I remember correctly, he didn’t know, so presumably, she was ready to tell him everything about what she’d been working on.) Since the tape wasn’t found by Bracken, it means it’s still out there somewhere. But they have no time to investigate further, Captain Donovan’s men barge in and take them to the precinct.

Castle and Beckett share a moment, Kate convinced this is it and that they’ve lost their shot at being together, when she sees her elephants on her desk. They were her mother’s elephants and her mother always said they were “a family.” Kate surges over, breaks open the elephants and there pops out the tape.  On it, Bracken tells Raglan and Montgomery that he’s had people killed before and he will do it again should he need to. The conviction in Kate’s eyes as she hears him admit to conspiring to murder her mother is so amazing, but the moment that follows is the scene we’ve been waiting for for six years. The way in which she stiffly but assuredly walks towards him, the glassiness in her eyes, the way she hesitates as she reads him his charges as she brings her mother to justice in the way that she would have wanted. Not just six years in the making but fifteen. As a fan of the show, this is a moment that could have gone so many ways, but they way it’s done just felt so right. I’m not a crier at TV (I’ll say, “I’m crying!” and only mean it figuratively), but I actually welled up myself at this moment. And then we see Castle’s happiness for her and his pride. “I never could have done this without you.” And they lean into each other, finally free.

It’s so interesting to me that they did this before the wedding, of course allowing the couple to get married without the fear of Bracken coming to ruin their moment (as a clichÃ©d writing team would have done) but the combination of the resolution of these two major plot points feels very series finale. I haven’t read anything suggesting they’d cancel the show this season and with this much wrap up, it’d be an announcement akin to telling us Lost or Breaking Bad or Mad Men was ending, giving fans time to prepare and for the media team to tease an ending. But we haven’t gotten any of that, so I want to believe the show will continue for a 7th season, so it’s very interesting that the two biggest story lines are being wrapped up in a bow like this. Of course, the finale could throw a wrench in that thinking: from the promo it looks like a light-hearted, comedic episode to fill our hearts with romantic joy as they get married, but who knows what the last act will bring? I can’t wait to see where they will take things. Should both story lines be wrapped up by the end of the next episode, what might the writers do next? Will we be teased a season 7 time jump, a la Parks and Recreation? Or might a new threat be revealed? We still have Jerry Tyson and Castle’s spy father to fill in the major arc heavy episodes and the promise of Caskett babies will of course be on our minds. More season 7 speculation next week, but before I go, some plot holes I noticed in this week’s episode.

What do you think is next for our dream team? Should the wedding go off without a hitch next week, where will the writers take our favorite crime fighting duo? Do you think we’ve got just one more season left?