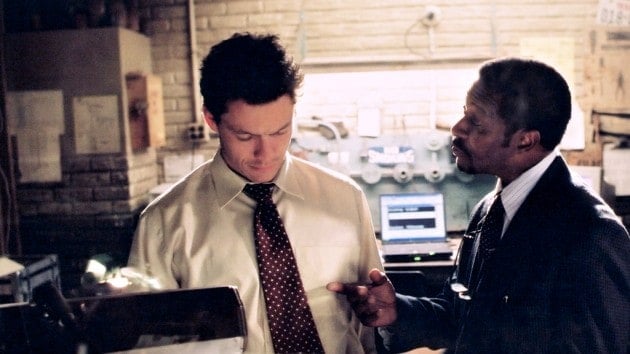 If you missed the news, HBO is remastering The Wire, marking a triumphant return to air after its cancellation in 2008 because nobody watched it or knew what it was. In that time, The Wire‘s become one of the most critically acclaimed (and heavily studied) television shows in American history – much-deserved praise for David Simon’s reflection on the state of American society. There’s hundreds of reasons why I can’t wait to watch through the show again, in all its beautiful, high-definition glory: here are five of the things that have me salivating to watch the first season again.

“You see these, McNulty? These are for you.” William Rawls’ introduction ranks among The Wire‘s greatest, McNulty’s adversary sitting in the shadows of his corner office. Always a thorn in the side of real po-lice, Rawls is arguably the slimiest of all the button-downed cop suits in Baltimore – and one of the angriest, his aggressive personality shining through whenever McNulty and his chain-of-command-ruining ass walked in the room. Needless to say, him screaming at McNulty is one of the show’s highlights; and it’s never seen more than it is in the first season, as the two of them fight over the Barksdale investigation from beginning to end.

One of the greatest television monologues ever, D’Angelo Barksdale’s speech to Poot, Bodie, and Wallace about the game of chess is the centerpiece of The Wire‘s first season. In one fell stroke, it added new dimension to one of the show’s most integral characters (proving that D’Angelo was intelligent, and not as immature as we may think) and gave voice to the heirchacy that exists in organizations like the one his cousin and Stringer Bell were currently running. How David Simon and company weave so many dramatic elements into one speech, delivered with such poetic tambor, is one of TV’s greatest achievements, a fine example of how The Wire operated both as a piece of dramatic television and deep societal critique.

Poor Wallace… Of the many characters who die on The Wire, Wallace’s death hangs over the rest of the series, something we’d watch Bodie and Poot deal with as they matured into young men on the streets through the rest of the show (or in Poot’s case, into a managerial position at Foot Locker). Maybe it was Wallace’s naivety, maybe it was his immaturity, or just the fact he lived in West Baltimore that led to his early death; whatever one decides the circumstances might be, our time with Wallace and his trademark ‘rows was too, too short.

In the pilot, Lester Freamon is nothing but an old man in a basement, making furniture. It’s a fitting role for the man who’d play the role of seer throughout the series, from Daniels to McNulty to his girlfriend, a former stripper who becomes an integral part of the Barksdale investigation. Some of my favorite images from the pilot are those just glancing at the man in the dark, staring through a magnifying glass to paint a tiny piece of furniture; simply put, it’s a badass way to introduce an important character (and in a very subtle way, allude to the watery dungeon McNulty would be banished to at the end of the first season).

McNulty and Bunk by the tracks

Ok, this could be McNulty and Bunk doing anything: investigating murder scenes, drinking at bars, hitting on women (or helping each other escape from their grips the next day)… but the true highlights of season one come when McNulty and Bunk drink by the train tracks, scenes Simon himself say are some of the most symbolic scenes in the series. I’ll let you figure that particular riddle out for yourself (after all, what’s the journey worth if I tell you the destination) – but even if you’re not watching The Wire for its literal symbolism, watching Bunk and McNulty toss bottles and urinate everywhere is one of life’s true pleasures.