Home
Television
Gotham
Can You Solve The Riddler’s Riddle In Gotham Promo? 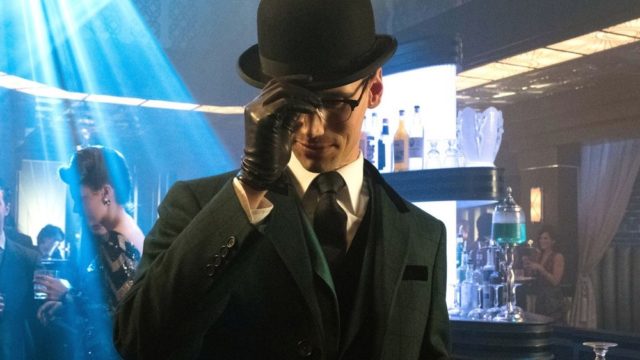 At night they come without being fetched and by day they are lost without being stolen. If you’re a lover of riddles then you should be able to think through the Riddler’s newest riddle in the Gotham promo for the upcoming season. If not then there’s always a way to look up the answer online, as with almost everything. But if you really want the fun of solving it then it’s time to get that brain pumping and use the ability to think around corners and over hills and past the boundaries of your comfort zone.

Give up? Should I ruin the surprise?

Okay then I won’t, but know one thing, any time the Riddler has ever laid down a brain-bender for Batman or whoever he’s attempting to stump it’s always been for a purpose. In this manner the Riddler is probably one of Batman’s greatest and most infuriating enemies. He wants to prove how smart he is, but at the same time he wants to be caught. Otherwise the riddles would be useless and just a means of distracting Batman and anyone else while he goes about his merry way of creating chaos and sowing his maddening riddles to the destructive ends of those that are caught in his twisted machinations.

There’s no doubt that he’s a shining star in the lineup of villains that have always been eager to take on the dark knight, but he’s one of the few, if not the only, that ever seems to lay the groundwork for his own failures. That’s why he’s such a frustrating villain, because he has the intelligence to make Batman’s life miserable, which he’s done in the past, but in Gotham he’s still more or less the same person that somehow feels the need to give the heroes an out of some sort to figure out his plan and eventually defeat him. In many ways he’s an intellectual masochist that isn’t using criminal acts to justify his life, but more or less to bring himself as close to the edge as possible without being caught.

The trouble is that Bruce Wayne is an exceptionally bright young man in the Gotham series, even if he is a bit naive still and not completely tested. His obsession with the eradication of the criminal underworld has sent his mind into so many different directions that he’s become a sort of human super computer that can not only think around corners but can allow him to anticipate what might be around the next three or four bends so that he can better prepare. The price for this obviously is that outside of crime-fighting and being a public figure he really doesn’t have a life that’s all his own.

The Riddler is the kind of Batman villain that’s more than willing to pit the life of Batman against the life of Bruce Wayne just to see if he can break the man or if Bruce will eventually find out his trick and catch him. It’s a complicated kind of villain that wants to be caught but only by the absolute best. In Gotham he’s a bit unhinged, but he’s also a very dangerous individual that’s best not to be trusted.

By the by, the clue to the riddle is in the article, if you can find it.