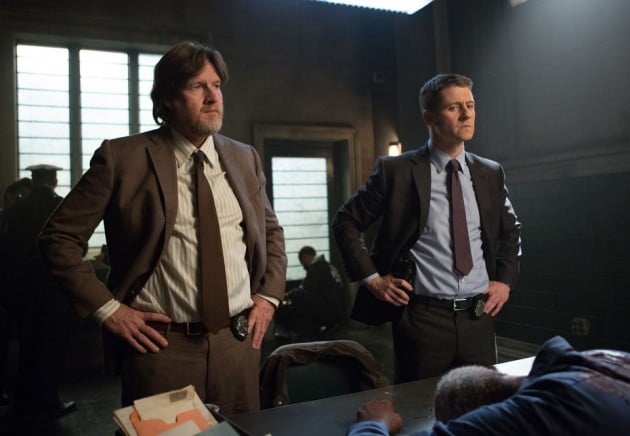 As the Batman prequel drama Gotham continues its freshman season, they are continuing to take small steps in improving the show in several different ways, as Gordon was reinstated at Gotham City Police Department this week.

A few characters that we haven’t seen for a bit since the show came back from the hiatus have been Bruce, Selina, and Alfred who have easily been some of the best characters of the show from the get go. However, they managed to surprise me as Selina, whom Bruce had been looking for since her leaving a few episodes ago, became very defensive and pretty much broke Bruce’s heart. I understand completely why Selina rejected Bruce’s offer to stay at his house and why she, supposedly, lied that she never knew who killed Bruce’s parents because this lies in the character’s nature. It will, however, be interesting to see where their relationship goes from here.

The A-plot of this episode was Gordon’s return at GCPD, and while there is always a big case going on there, this week’s case may have been the show’s most interesting one yet. The best aspect of Gordon’s journey in this origin story is seeing those big and small victories, especially since he is working for a police force that has some very corrupt officers within it. We get introduced to a very iconic GCPD character from the Batman mythos, Arnold Flass (Dash Mihok), who first appeared in the iconic Batman: Year One book, and they pretty much nailed him on the show.

Even though I was glad to see Gordon being able to take him down after Flass murdered Leon Winkler, who was a witness during a mob hit, I wish that they stretched out this little arc so that we could have seen more of that power struggle. It’s always interesting whenever the hero has to try and take down a villain who is working around him, and there is always the chance that we might see Flass again, although it’s unlikely.

It would be foolish if we didn’t talk about the major events that Fish Mooney had to go through in “Welcome Back, Jim Gordon.” I don’t know if this was the director’s choice or Smith’s choice as an actress, but did anyone else feel that throughout the whole torture arc that she was acting like a sassy cat? I know the whole point was that she is a rough woman, therefore it’s not easy to torture her, but it came off as a comedic attempt rather than someone who was strong in those types of situations. Is it odd that I have been able to enjoy Butch in pretty much every episode he has been in, while Fish is still on and off for me?

Butch is such a great character that I hope will survive and not be killed off just because he wants to protect Fish. It remains to be seen now what happens to him and what Zsasz will do with him, but hopefully Bullock will save him as Fish asked him to. As presented in this episode, the upcoming big battle between Fish and Penguin is starting to get more build up. Can we just all agree that Penguin’s geek-out of having the club was one of the funniest things in the episode because it just explains how twisted this character is and will be in the future.

Overall, this was one of the better episodes of Gotham and a personal favorite of mine because as mentioned above, they are taking small and safe steps in improving the show. There is still plenty of room for improvement, but they are starting to capture my interest for each episode that airs. While I expect Season 2 to be a completely different animal, what they are currently doing is becoming more enjoyable, and as a viewer, these latest episodes have been able to make you start investing in what they are doing.