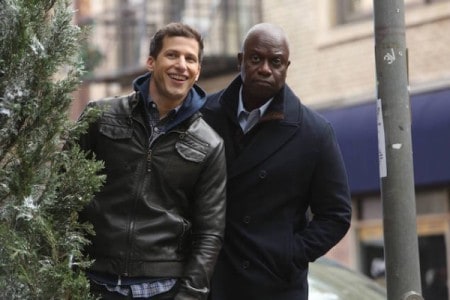 There are few things Brooklyn Nine-Nine does better than a good Jake and Holt storyline. Putting these two polar opposite characters in a room together for any amount of time will almost always lead to hilarity, as Holt encourages Jake to be more mature and Jake in turn encourages Holt to loosen up a bit. When the series started, it seemed like the differences between these two men would lead to much of the conflict in the show and while this was true initially, their relationship slowly progressed into more. Instead of remaining enemies, the two became friends with Holt becoming somewhat of the father figure and mentor that Jake never had growing up. The two bring out the best in each other, leading to some positively entertaining interactions. Tonight’s episode of Brooklyn Nine-Nine, however, posed a very important question: what would happen if Jake and Holt were quarantined in a room together while working a case and were forced to spend more time together than ever before?

As you might have guessed, this premise led to some great comedy. With Holt’s husband on sabbatical and out of the country, the team had noticed that it was affecting their captain, as he became more withdrawn and apathetic. It was clear that he was lonely without his husband, though he would never admit it. The only way Jake could think of to get Holt out of his funk was to speak to the one thing these two men share in common: their love of the work that they do. Pulling up an old case that was never solved from his first year at the precinct, Jake pretended that he had discovered new evidence and asked Holt to work the reopened case with him.

This immediately lifted Holt’s spirits, as the two got to work on the case that Jake never expected to be able to solve. Their investigation led them to a mumps clinic where they both contracted the disease that required them to be quarantined. Knowing that spending a week by himself would be the worst thing possible for Holt, Jake suggested they continue working the case while quarantined together. With some help from Amy, who was immune to mumps, the two set up shop at Holt’s house and kept looking at the evidence, hoping to find a break in the case. Leading to some hilarious, cold medicine-induced interactions, the two fumbled their way through the case, clearly not thinking right because of the disease. Despite them thinking that they had solved it, Amy put a stop to them actually going out and making the arrest, pointing out to them that nothing they were thinking made any sense.

At this point, Amy made Jake tell Holt that there never was new evidence for the case and he was only using it as a way to help Holt deal with his husband being away. The two kept getting sicker and refused to rest because they were set on solving the case and Amy knew the only way to stop this was to tell Holt that the case wasn’t legitimate. His reaction was less than stellar, as Holt is not a character that likes people to take pity on him. He views that as showing a weakness and if there’s one thing Holt doesn’t want to be perceived as, it’s weak.

In a rare change of roles, it was Jake who had to step up and be the mature one when Holt reacted immaturely to his attempt to help. While Holt saw what he did as taking pity, Amy and Jake were able to show him another way of thinking. He quickly realized that really, this just showed how much his friends cared about him and that’s not something he could be angry about. And when Amy attempted to bake a recipe that the two men had discovered during their drug-induced investigation, all three discovered that the recipe was actually a code, giving them the phone number to the man they were trying to put away. The case was solved, but more importantly, we got to see Jake and Holt’s roles reversed in a very entertaining plotline.

Meanwhile, at the precinct, Terry was put in charge while Holt was gone for the week. Throughout the series, we’ve seem Terry step into leadership numerous times and now that he’s actually pursuing a leadership path at the precinct, this was a big test for him to see if he could handle it. With employees like Hitchcock and Scully though, things rarely go smoothly. Terry has a tendency to let anger and stubbornness take over when things aren’t going the way he wants them to go. This was apparent after he made a long list of things he wanted to get done at the precinct that no one took seriously. His attempt at leadership led to a hunger strike from Hitchcock and Scully, but thankfully Terry had Gina there to help him see reason and bring order back to the Nine-Nine.

On the surface, Gina may not seem like a great friend but when it comes down to it, she’s always there for the people she cares about. This time, it took a pep talk from Gina to show Terry that being a leader doesn’t always mean getting everything accomplished. Sometimes it just means putting out fires and making sure everything is running smoothly. This was a message Terry clearly needed to hear, although unfortunately it came after he had slammed the office door closed in rage, shattering the windows. But Gina’s belief in Terry did help him not give up on his goal to become a leader. And he did successfully end the hunger strike by throwing food on the floor, so you can’t say he didn’t accomplish anything.

On top of everything else that was happening, Boyle too was struggling with something. One of his beloved dogs had passed away and when he told Rosa about it, she offered little comfort. These two make strange friends, as Boyle is extremely emotional while Rosa stays as far away from emotions as possible. But somehow the pairing just works. After the allotted three days of crying that men are allowed according to Boyle’s father, he still wasn’t over the loss of his dog and Rosa was getting sick of it. She bought him a new dog to try to cheer Boyle up and when he refused, saying that it wouldn’t help, she ended up keeping the dog. It didn’t take long for Rosa to understand how strong of an emotional connection can form between people and animals. This experience helped her better understand Boyle’s devastation, and she even gathered the group to honor Boyle’s deceased dog with a memorial in only a way that Rosa can. In an all-around comedic and entertaining episode, this nice gesture from Rosa was just icing on top of the cake.

Jake and Holt work a case while quarantined together in a fun episode of Brooklyn Nine-Nine.