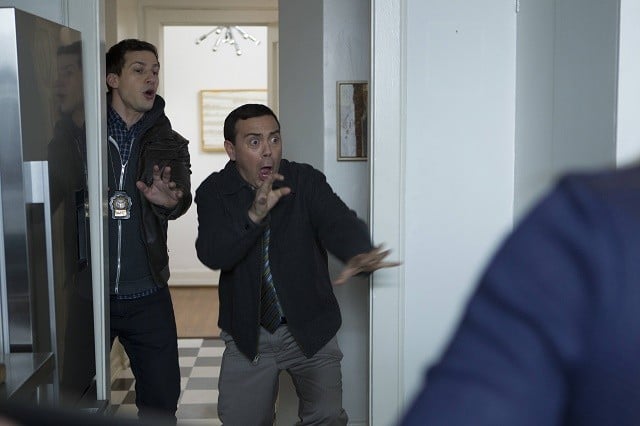 Brooklyn Nine-Nine may have moved to a new night, but its return from the mid-season hiatus proved that the scheduling switch was the only thing about the show that would be changing. Part of a fantastic new comedy block on FOX, Brooklyn Nine-Nine joined forces with other shows, all of which flawlessly blend comedy and heart. In a solid return, Brooklyn Nine-Nine showcased a friendship that has always been central to the show, that between Jake and Charles. While the two men worked to rescue Boyle’s sperm from his ex-wife, Gina was given her first real chance at being a detective, and Amy and Terry’s friendship grew (but not without some damage along the way). Despite not being the most funny episode of the show, it did manage to provide some good laughs while also providing new insights into the characters.

Usually any episode that focuses on Charles and Jake is guaranteed to be comedy gold. For one of the first times, their storyline fell a bit flat for me, but nonetheless, it had a rewarding ending. After deciding that he wanted to have a baby with his girlfriend, even though they’d only been dating a few months, Boyle revealed that he can’t children anymore and that he had frozen some sperm in case he ever wanted to. When he went to take it out, though, his ex-wife found out and beat him to the punch, taking the sperm which she technically had a legal right to. Throughout the episode, Jake and Charles worked to get it back, but no matter what they did, she refused.

While their attempts at recovering the sperm didn’t have the comedy we’ve come to expect from these two, the storyline as a whole made up for it when, in the end, Jake helped Charles realize what really makes someone a dad. Usually it’s Charles stopping Jake from doing crazy and ridiculous things, but this time it was Jake who had to stop Charles from threatening a priest, which he believed was the only way to get his sperm back from his ex-wife. After stopping Charles, Jake used his own experiences to make him understand that biology isn’t what makes someone a father. A true father is someone who is there for their child no matter what, something that Jake’s biological father was never able to do. This rare serious moment between the two made up for the lack of comedy in the rest of their storyline as it showed another side to Jake and Charles’ friendship.

Most of the laughs in this episode came from the other storylines, one of which revolved around Gina getting the chance to try her hand at interrogating. When an old classmate of hers said that he’d only talk if she was the one doing the interrogation, Holt and Rosa had no choice but to allow it. Of course, Gina just wanted to go with her instincts and charge in with no advice; unsurprisingly, this didn’t go well. In the end, it was Rosa who finally got him to crack after the two bonded over complaining about Gina’s selfishness. While nothing too substantial happened in this storyline, it was fun to watch and gave a look into exactly what kind of detective Gina would be if she ever went down that route.

The true beauty of last night’s episode came from a pairing we don’t see often: Terry and Amy. When Amy asked Terry to write her a recommendation letter to be a part of a mentor program, he was more than willing to help her out. But after a series of mishaps that involved Amy breaking Terry’s nose and spilling hot coffee on him, among other things, she wasn’t so confident that his recommendation would be glowing. After discovering that she didn’t get into the program, she immediately blamed him, accusing him of letting his anger over the injuries bias his letter. Terry was quick to guilt Amy by showing her the glowing recommendation that he wrote, leaving her to question why she wasn’t chosen as someone to be mentored.

It wasn’t until the end of the episode that we discovered the true reason Amy hadn’t been picked for the program. Terry had written her letter assuming that she wanted to be a mentor while Amy had applied as someone to be mentored. With this figured out, Terry was able to get her a spot as a mentor, trusting that Amy was strong enough and good enough at her job to take on that role. This moment truly strengthened the friendship between the two and was definitely a highlight of the episode. As someone who is constantly seeking approval, Terry’s belief in Amy meant a lot to her, and that was really nice to see. While Brooklyn Nine-Nine‘s return may not have been its best episode of the season, it provided the audience with exactly what we’ve come to expect from this show: plenty of laughs amidst great character moments that display the true heart of the show.

Jake helps Boyle face his ex-wife in an entertaining episode of Brooklyn Nine-Nine.