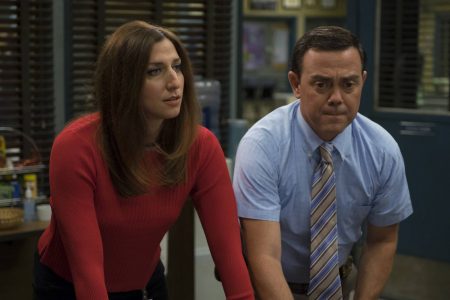 They say never meet your hero because in the end, they’re only going to let you down. Even Scully, who isn’t the brightest member of the squad, was able to give Jake and Terry this advice at the beginning of this week’s Brooklyn Nine-Nine episode. But that didn’t stop Jake, who always takes it upon himself to try to help people even when they don’t want his help, to make sure he and Terry were working the case for Terry’s favorite author. Although reluctant at first, Terry eventually saw the benefit in this as he immediately bonded with the author who had offered him advice thirty years ago, inspiring Terry throughout his life.

It wasn’t surprising that the initial impression of the author was a mere illusion as he, like most heroes we’ve never met but hold on a pedestal anyway, turned out to be just as flawed as any other human. Terry was left disappointed, realizing that the man he truly believed was a hero and who had inspired him to get his life together, wasn’t nearly as amazing as he made himself appear. It was Jake who was able to make Terry realize though, that often heroes can be people we meet in our every day lives.

A hero can easily be someone you’ve known for years, who has never let you down, and has remained a moral pillar for you to follow and be inspired by every day. And for Jake, that person is Terry. Sometimes the best hero is someone you observe every day being the kind of person you wish to someday be like, not an author or public figure that only lets the public see the side of them that makes them look good. Terry and Jake shared an important moment in the episode as Jake made sure Terry realized that the way Terry inspires him means that whatever Terry did to become the man he is worked, regardless of whether the author he held in such high esteem ended up being as perfect as he seemed.

While this was happening, Gina found herself getting to know the Boyle clan. Wanting to convince Charles’ cousins that the family trip should be to Aruba instead of Iowa, she took a crash course in getting to know them without even realizing it. Not one to make friends or grow close to anyone easily, having shown herself to be a rather self-centered character instead, it was interesting to see Gina connect so quickly with a group of people. Even if she was just doing it to convince the Boyle’s that her idea was better than Charles’, it still accomplished the same thing: Gina found a family in the Boyle’s.

We were also reminded in this episode that the squad is still suffering through the horrors of night shift, a plot that is easily forgotten until it’s convenient for them to bring up again. In a somewhat played out story that we’ve seen before, Holt and Kevin were bickering over a math problem when their real problem was that they weren’t seeing enough of each other. While Amy thought that showing Holt the solution to the math problem would bring them peace, Rosa took her usual approach of speaking her mind, letting Holt know the real problem was that he and Kevin weren’t boning. Though horrified at first, Holt ended up taking Rosa’s advice, fixing things with Kevin.

I’m fairly certain we’ve seen almost the exact same storyline between Holt and Kevin before but that’s not to say it didn’t have its bright moments. When you put Andre Braugher, Stephanie Beatriz, and Melissa Fumero in the same room, there are bound to be some laughs. Observing these characters’ incredibly different personalities play off of each other is always entertaining but in the end, the storyline did seem somewhat like filler. In fact, the episode as a whole felt a bit like filler, with Jake and Terry’s storyline being the only one that really packed a punch. It wasn’t a bad episode but it was probably one of the weaker ones in a season that has, overall, been very impressive.

Terry met his hero while Gina met the Boyle cousins in an episode of Brooklyn Nine-Nine that felt like filler.