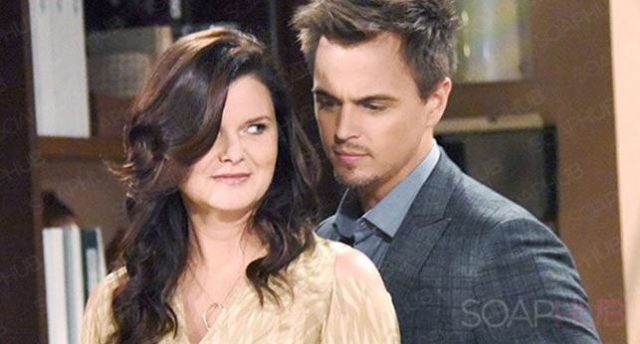 The Bold and the Beautiful fans are aware that Wyatt had a plan and then Katie totally threw it out the window in favor of her own plan. She wants to get her boyfriend to make a deal with his father. She’s sure she can convince Wyatt to do what she says so that she can get what she wants from him. She wants him to take her advice. She’s certain she has the answers that he needs and she can convince him to handle things in her manner.

And we know that Wyatt will do anything she wants. She’s not a stupid woman, she’s a lot older, and she’s got more experience than he. She also spent many years of her life married to Bill and knows him quite well. She’s familiar with his mannerisms, his ideas, and his ways — and that is precisely why we think she could be on to something with this. We do think that she might be able to get him to do something useful if she does put her mind to it, and that’s good news for all of them.

If she can get Wyatt to do this, they have a better chance at taking him down and crossing him off their list. They’re working hard on that as it is, and this might just make the situation a little better. Of course, she has no idea he already knows that she and Wyatt are still together — and that he is plotting to take them down in his own way.

Good news for Katie. Wyatt will do anything she says, and he will totally be all for this. He will ger right on it. There is nothing that he will not do if she tells him to do it, and this is going to be one of those moments. It is going to put them one step closer to figuring things out the way they want them figured out, and she will like that. She likes how this is going and what it all means for her. It’s good news for her.