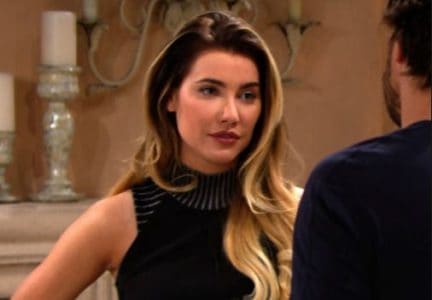 Bold and the Beautiful fans want to know more about Steffy and Liam. We told you a few weeks ago we have some serious suspicions about these two, and we have more than a few speculations to make. Keep in mind we are just predicting what we see coming in the near future, and we are excited to see if we are right. Steffy is pregnant. She’s going to have a baby, and she’s excited. She’s also a little worried that it might not be her husband’s. Apparently, she’s  not been entirely honest with Liam about her marriage to Wyatt, and she managed to be with them both around the same time — or at least close enough together to cause her to wonder if the baby might be her ex-husbands.

We also wonder what this might do to them as a couple. They’ve been married before, and they’ve been pregnant before. She lost the baby in a motorcycle accident, and things didn’t go well for them following that. Steffy wasn’t able to keep their marriage together following that accident, and we hope that this doesn’t happen to her now. She’s got a lot to deal with in terms of her own marriage and relationship, and this means they have issues to work on.

If she is pregnant with a baby that could be Wyatt’s, we don’t anticipate she will say anything to Liam. We do think that she might wait for Wyatt to say something to her — and he will. There is no way he will forgo saying a word to her if he suspects she’s further along that she thinks. If that’s not what happens now, it will only be a matter of time before she gives birth and someone wants to know something about the paternity of the child. It’s not ideal, and it could become one of the ugliest storylines of all.