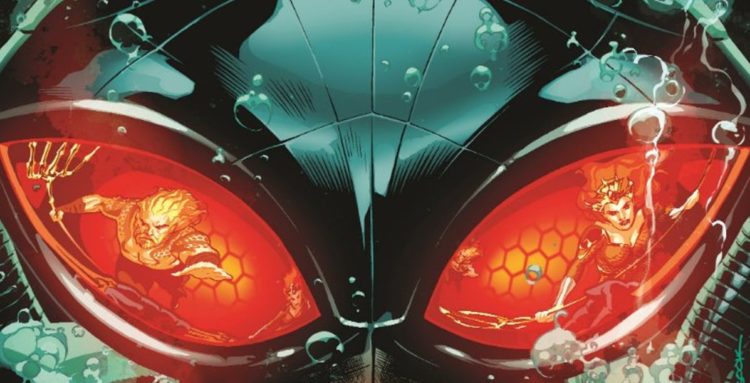 DC is filled with psychotic villains that all have their reasons for hating one hero or another, but Black Manta has a serious hate on for Aquaman given how his origin has been written in. Throughout their long history thus far he’s been seen to gain the upper hand a time or two and has made Arthur Curry’s life a nightmare now and again, but like many evil-doers he tends to overreach at times and trips over his own hubris. That seems to be the way of villains at times, they seek to destroy that which vexes them the most, but in the doing they tend to forget that heroes do sometimes let go of conventional thought and will gladly get just as nasty when it comes to gaining the needed result. Aquaman, for his own part, has largely remained a hero that many can look up to, but with Black Manta it’s been seen that he’s had to get down and dirty a time or two.

Here are a few things about Black Manta you might not have known.

10. He had a falling out with Lex Luthor.

You would think that villains might find a common ground when it comes to hating heroes and wanting to get rid of them, but as Matt Morrison of ScreenRant points out Lex and Black Manta haven’t always seen eye to eye since Luthor does have a line he won’t cross while BM is bound to go all the way no matter what it takes to get rid of his enemies.

He showed up in issue #6 of Aquaman’s saga, so he’s been around for a while now and it might seem that a lot of people are just now getting to know about him, but it could be that he didn’t get the same push as big-name villains like Lex Luthor.

8. He didn’t have a definitive origin at first.

There were a couple of different origins, one being that he was kidnapped and tried to call for Aquaman, who didn’t hear him. That led to BM hating Aquaman and wanting revenge, but the second origin is the one that stuck, that he was an autistic youth that was eventually augmented and still developed a serious hate for Aquaman.

Being that he already hated Arthur and wanted to eliminate him it might seem that Arthur would try his best to simply stay out of the way or finally deal with him, but when this happened things were bound to get insanely personal and make the fight that much more vicious.

6. At one point he was turned into a human/manta hybrid in exchange for his soul.

This was something that Aquaman eventually undid since it definitely made Black Manta a lot more dangerous and possibly more powerful than Arthur wanted to deal with. Plus, humbling an enemy like this seems to be the hero’s responsibility at times.

5. He eventually retired and made an honest living but went back to crime when Aquaman was resurrected.

It’s hard to think that a villain like Black Manta would bother retiring and trying to do anything honest but it would seem that he did just this. But when he noted that Aquaman had returned he went right back to his life of crime, killing all his customers and burning down his store.

4. Quite often he relies more on his technical skills than hand to hand combat.

There’s no doubt that he has a lot of martial skill and can take Aquaman on when it comes to hand to hand combat, but he does tend to rely a lot more on his gadgets and tools than anything else. This might give him a slight disadvantage, but he’s taken Arthur to the limit more than once during their long-standing feud.

3. He once possessed a device called the black pearl that allowed him to control the oceans.

This alone would give Aquaman all the reason he needed to shut Black Manta down for good, but obviously that didn’t happen since a lot of heroes are still bound by the idea that killing their enemies doesn’t solve the problem. There’s truth in that, but simply incarcerating them doesn’t seem to do much good either.

2. Black Manta was an autistic youth.

Apparently he loved freezing cold water as it calmed him down, but he couldn’t stand the feel of cotton sheets on his body as it drove him nuts. Eventually he was augmented in some way and his autism wasn’t cured but he did manage to push past his limitations.

1. He was a drug smuggler at one point in Star City.

This of course put him square in the sights of Green Arrow as well as Aquaman, who both worked to take him down.

Out of all the DC enemies he’s not likely to be the worst but he’s still hard to dismiss.